Guaranteed basic income program begins in Tacoma; families get $500/month for one year

The 110 Tacoma, Wash., families chosen to participate in a guaranteed income program received their first $500 check this month, according to MyNorthwest.

The program launched by the Mayors for a Guaranteed Income is backed by $18 million in donations from Jack Dorsey, co-founder and former CEO of Twitter. The effort is being done in partnership with the University of Pennsylvania’s Center for Guaranteed Income Research, which is studying the impacts of providing regular income to families. Numerous income pilot projects are underway around the country.

Tacoma Mayor Victoria Woodards was a founding member of the nonprofit Mayors for a Guaranteed Income. Half of households in Tacoma and surrounding Pierce County earn less than $72,000 a year, which is the minimum needed to cover basic expenses, according to United Way of Pierce County, a partner of the local pilot.

The program in Washington state, which is called Growing Resilience in Tacoma, or GRIT, will provide families $500 a month for one year.

Participants in the program must reside in certain Tacoma area codes; live in a single-parent household with children; and meet the definition of having limited assets and income while being employed.

Some 2,000 people applied and qualified participants were randomly chosen. A control group of 135 households who will not receive $500 was also selected. Both groups will be given regular surveys about their expenses and expenditures and receive $30 gift cards for each completed survey.

Thank you Mayor and to all the Mayors of @mayorsforagi for these universal basic income pilots! I hope they inform federal policy in the future. https://t.co/6ItPWx3Lld

Dorsey donated $15 million to the effort in December 2020, adding to an initial $3 million gift. Mayor Michael Tubbs of Stockton, Calif., led the creation of Mayors for a Guaranteed Income. He ran the Stockton Economic Empowerment Demonstration, an earlier effort to provide income to residents.

In announcing the donation one year ago, Dorsey addressed Tubbs in his tweet: “Thank you Mayor and to all the Mayors of @mayorsforagi for these universal basic income pilots! I hope they inform federal policy in the future.”

Dorsey isn’t the only tech leader interested in the concept of boosting incomes for Americans. Tech entrepreneur Andrew Yang promoted the idea of a universal basic income as part of his platform when he ran as a Democratic presidential candidate in 2020. In a different tact, Seattle venture capitalist Nick Hanaeur has for many years been a staunch supporter of higher minimum wages. 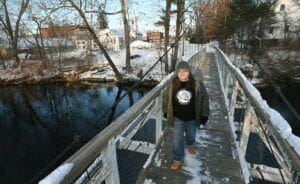