Census surveys show that low income families are using the child tax credits to pay off debt. This is why it should be made permanent.

America’s poorest families are using new child benefits in large measure to climb out of debt, much of it likely accumulated during the pandemic.

U.S. Census Bureau surveys are offering an early glimpse of how households are spending $30 billion in enhanced child tax credits that have been distributed so far in two monthly payments. Families who earn less than $50,000 a year are focusing first on paying off debt.

The payments of up to $300 per child, part of President Joe Biden’s American Rescue Plan, are a first-ever effort to distribute monthly checks to help families better manage living costs such as groceries and school supplies. The administration has touted the tax credits as a step to reduce child poverty.

There’s evidence from earlier in the pandemic that people used stimulus payments to reduce their dependence on high-cost debt like payday loans, according to Alex Horowitz at Pew Charitable Trusts, who’s researched the issue.

That’s probably happening again, Horowitz said. “I don’t know if that was one of the goals of the child tax credit, but it is likely to be one of its benefits.”

In Duluth, Georgia, Tanzida Zaman said she steered her $300-a-month payments toward medical bills that accrued since last year, a result of “a lack of ownership between my two insurance providers.”

Zaman, a project manager who considers herself middle income, uses anything left over for child care for her 13-month-old daughter. She’s also used previous federal relief money on medical bills, she said.

“The stimulus and child tax credit have been a very welcoming addition,” she said.

The monthly payments had an immediate economic impact, data show. Personal incomes rose more than forecast in July, reflecting in part the distribution of the first checks to the families of about 60 million children. The Center on Poverty & Social Policy at Columbia University found that the money kept almost 3 million kids from poverty.

But it may not last. Remaining pandemic relief programs are winding down and a wave of evictions is looming with a federal moratorium ending in October. The expanded child benefits, a program that advances tax credits that parents would normally get in their tax refund and boosts the amount to as much as $3,600 for kids under 6, end next year. (Advocates are calling for making them permanent).

The percentage of families citing food insufficiency fell after the first tax-credit checks arrived in July, Census surveys show. Even those who reported using most of their checks on debt also spent some of the money on food, clothing, rent and school supplies.

The grocery industry is poised to benefit. The sector could see an $8 billion lift from the child tax credits in the second half, according to Cowen Inc. analyst Oliver Chen.

“If you’re trying to stretch your dollar, you’re not going to go to the fresh produce area,” Sizemore said.

Briana Daniels, 26, had stopped by a food pantry in Clarkston, Georgia, mid-August, her 10-month-old daughter in the back seat. Her $300 monthly tax credit payment will only cover a week’s worth of child care, which runs $200, and maybe a bit of food.

“It goes pretty quick,” she said. 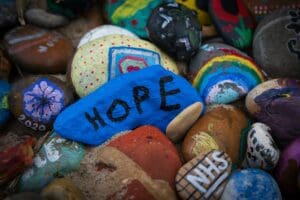