Investor Chamath Palihapitiya said Wednesday that the United States should continue sending Americans checks as the coronavirus pandemic continues to impact the economy.

“We really need to think about direct, capital injections into the hands of people,” Palihapitiya said on CNBC’s “Fast Money Halftime Report.”

Palihapitiya has been critical of the United States’ economic reaction to the Covid-19 pandemic, saying that stimulus money should go directly to consumers and workers rather than businesses. The government has already dolled out cash to some Americans as part of its $2 trillion stimulus bill. That included one-time direct payments of up to $1,200 for individuals and $2,400 for couples, with $500 added for every child, based on 2019 or 2018 tax returns.

Palihapitiya’s comments call to mind the idea of universal basic income, or UBI, which was a cornerstone of businessman Andrew Yang’s presidential candidacy, and has been promoted by Silicon Valley luminaries such as Facebook CEO Mark Zuckerberg, Tesla CEO Elon Musk and former Y Combinator President Sam Altman. In tech circles, UBI is viewed as a way to help people whose jobs will be replaced by computerized equivalents, such as self-driving cars, as artificial intelligence gets better. But as the coronavirus pandemic and shutdowns cause unemployment to spike, the idea is taking on new relevance.

In addition to direct help, the Federal Reserve has announced a slew of new moves aimed at getting trillions of dollars into businesses and governments, including its Main Street business lending program and market interventions, as part of an aggressive strategy to keep markets functioning and support the economy.

However, Palihapitiya said these grants may not help the companies survive the year. He predicted that companies will have a slew of layoffs in the fourth quarter of 2020 after they spend the money received and continue to be impacted by the pandemic.

“I think that a lot of companies that got support will still be struggling when the terms of those grants and loans fall off, which is September. And unfortunately, I think we may see large waves of layoffs that just happen in Q4 heading into Christmas time of 2020,” he said. 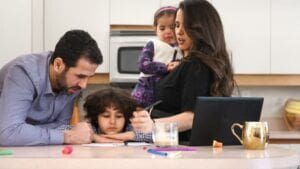 Refundable Tax Credits as Steps toward a Guaranteed Basic Income for Canada?

Universal Basic Income would ‘value each individual in a society’

Canada’s election could have been about basic income