Fed up with the government’s failures during the pandemic, #1400Challenge is inspiring people to turn their front yards into communal gardens.

Michael Chaney had a eureka moment at a grocery store in Tampa, Florida. It was the beginning of the pandemic, and many of the aisles were empty and in shambles.

“People were fighting over bleach and toilet paper,” Cheney, who is better known as “Spirit Mike,” told Motherboard. He realized that the value of his income from driving trucks was limited by supply chain disruptions. “That’s when I started researching about growing food,” he said. “I started getting into nutrition real heavy.”

He used the government cash to purchase starfruit, moringas, cashew apples, strawberry guava and other plants by the dozens to transform his once unremarkable and inedible 0.3 acre lawn into a lush sanctuary and community space dubbed New World Growers.

Biointensive gardening principles, which emphasize deep soil preparation, composting and closed loop systems, allow Chaney to maximize yield in a small space. “My aim is to make my food cost zero,” he told Atlanta Black Star. “So, my food scraps go into the soldier fly larvae bin, they eat that and produce more larvae. Those larvae get fed to the chickens. The chicken produces eggs, I sell the eggs and eat the eggs; life is good.”

Now, Spirit Mike is encouraging others to join him in building community survival and food autonomy projects as part of the #1400Challenge, a hashtag campaign which prompts people to spend their stimulus checks on projects that benefit their local communities. Autonomous groups around the country created a series of shareable graphics with ideas for translating stimulus funds into collective power. By pooling together $1,400 or less, groups can build mesh networks, sound systems for protests, community gyms and pallet homes, and even create infrastructure for food production.

Food autonomists argue that bureaucratic states, top-heavy non-profits, and greedy corporations are unable or unwilling to meet people’s needs, especially during crises. This became especially apparent during the onset of the COVID-19 pandemic, when videos circulated showing crops being destroyed and farm workers toiling in the fields as the California wildfires raged.

Instead, marginalized communities can collectively take care of each other. “It’ll take more than a stuck container ship to break the hold of the economy over our lives,” wrote Inhabit, an especially poetic group involved in the push. “Design and build new ways of living together, that lessen our dependence on their system at the same time that we cultivate trust in one another. Leverage all the means at our disposal—including their cold hard cash—to bring out the beauty, dignity, and creativity of our shared existence.”

Lobelia Commons, an open collective of gardeners in New Orleans, is promoting “decentralized nurseries”—hubs of seedlings that are free for anyone to take.

Soil, plants, containers, shelves and propagation and irrigation tools can be purchased for $1,400 or significantly less. “It’s a way to have outsized influence on local food autonomy relative to how much land/labor is required,” the collective wrote on Twitter.

Lobelia has installed about a dozen decentralized nurseries with medicinal herbs and hardy vegetable plants throughout New Orleans with some help from stimulus checks. But a volunteer who goes by Yam told Motherboard that they scavenged a significant amount of supplies for free. “Outside of Whataburger, for example, there could very well be giant clay pots full of soil that nobody has ever planted anything in,” they said. “Home Depot and Walmart have a bunch of plants that they just leave in the parking lot that will probably end up in the dumpster anyways. You can just take that, nobody will be really mad.”

The collective’s other endeavors have grown rapidly. A “mushroom working group” has inoculated thousands of pounds of oyster, shiitake and reishi mushrooms. Food from their community gardens is fueling local free grocery delivery programs and community fridges. Through a new front yard orchard initiative, volunteers plant fruit bearing trees in locals’ yards, and other publicly accessible space, for free. Response from the community has been overwhelmingly positive so far, Yam said.

Projects with similar goals have surfaced all over the country.

Many Trees in Seattle are distributing and planting thousands of fruit and nut bearing trees throughout the city. The Neighborhood Planting Projects in Carbondale and Bloomington host community gardening days, plant swaps and freely distribute a variety of nutritious trees in Indiana. In Indianapolis, Growin’ Good in the Hood is starting community gardens and teaching marginalized groups how to grow their own food.

While the pandemic and other crises have sparked an increased interest in food autonomy projects, there is nothing new about the concept. Prior to colonization and the capitalist “enclosure” process, where authorities violently forced the commons into privatized land, many communities possessed a wealth of intergenerational knowledge about resilient and sustainable food production.

This aim differs from the burgeoning farm-to-table movement, which generally promotes centralized food production on local farms. “It would be enriching for a lot of people’s lives if a larger percentage of the population was engaged in food production,” Yam said. “I think we could get to a place where we’re relying on tree crops and long-term, low labor kind of things, so that we aren’t requiring anybody to do the kind of back-breaking farm labor that feeds all of us these days.”

Chaney shares a similar vision. He’s been teaching his neighbors, including kids who may otherwise be on the streets, how to start their own gardens. “I want to have at least two community gardens on every block,” he said. “They each would have a multitude of fruits and vegetables for themselves, but they could each have a cash crop too.”

Decentralized gardens would decrease communities’ reliance on the corporate class, he says. “Without us taking the reins ourselves, especially with our food, we are going to be beholden to the [rich] people that really don’t care about us,” said Chaney. “So it behooves us to care about ourselves.

This movement is about us caring about ourselves.” 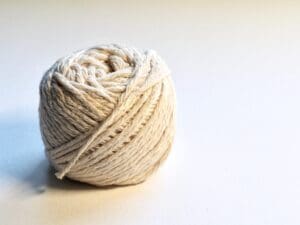 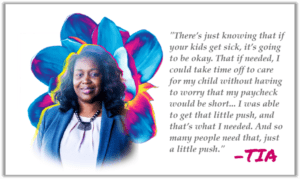 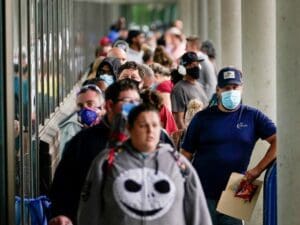 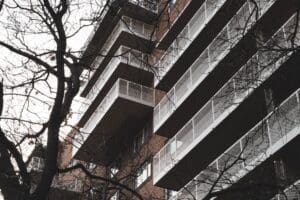 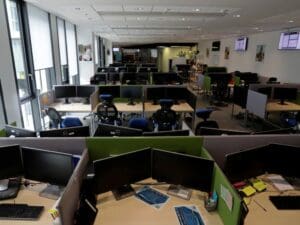