Many of us working in food security recognize that a large portion of the folks who engage with our services are Black, yet there has been an absence of research that seeks to explore the relationship between racialization and food insecurity. There is existing data coming from the Canadian Community Health Surveys (CCHS) that demonstrates that Black households have a higher prevalence of food insecurity in this country. Despite this awareness, many organizations and most notably our governments continue with business as usual, with a lack of a race analysis, in addressing food insecurity. Charities are happy to hand out food to Black people, but many remain reluctant to understand why Black people are hungry in the first place.

At FoodShare, we ground our work in an understanding of the underlying factors that cause people to access charitable food resources. We are committed to dismantling the systems that cause and hold food insecurity in place. Recently we forged a research collaboration with PROOF, an interdisciplinary research program investigating household food insecurity in Canada at the University of Toronto, led by Valerie Tarasuk, a professor in nutritional sciences. This partnership allowed us to do a deeper dive into the issue of food insecurity in Black households and how it relates to white households.

Our first and most immediate realization: this research was novel. It represents the first intentional examination of race-based disparities in household food insecurity using a population-representative national survey (the CCHS). This was surprising to us, because it seems obvious that the best way to support a vulnerable group should be to collect and further analyze the data associated with that group. If we collect this data already, shouldn’t we be using it to better understand and design effective interventions?

The research identifies that the higher prevalence of food insecurity among households with Black respondents is simply because they are Black. It’s not caused by anything else. The fact that we could not pin the difference down to any one characteristic such as family structure, income or participation in the workforce speaks to pervasive race-based disadvantage. 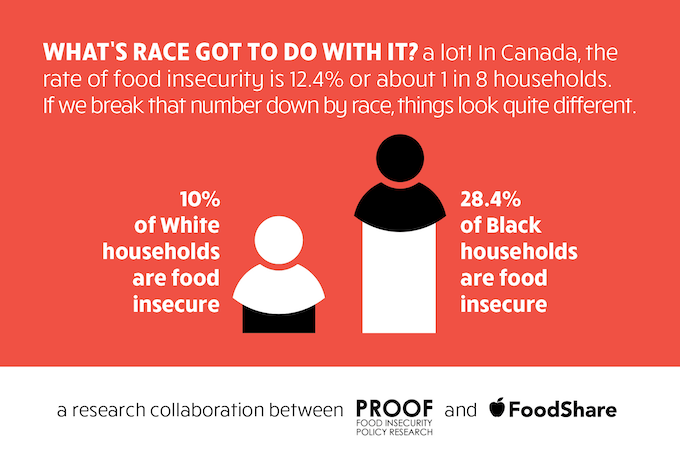 When the numbers are placed side by side, it’s easy to see the impact that race has on food insecurity. We found that:

Taking a deeper dive into each factor helps to illuminate the prevalence of this problem even further. While single-parent households influence the rates of food insecurity for white respondents, Black households maintain a significantly higher probability of food insecurity regardless of their household composition. White renters and Black homeowners have the same risk of household food insecurity which suggests that Black homeowners carry other financial burdens. When it comes to immigration status, It doesn’t matter if Black respondents were born in Canada or born abroad — the risk remains consistently high.

We need to fundamentally change how we understand and work to address issues like food insecurity in this country. There is no soup kitchen, food bank, community kitchen or produce-buying club that is going to dismantle the systemic racism that sentences Black people to food insecurity in Canada. We must acknowledge and tackle the racial discrimination in our education system, policing, labour and housing markets, so that Black Canadians have the same opportunities as white Canadians to survive and thrive.

Instead of a universal basic income, our governments negate their obligations to food-insecure Canadians by heavily relying on community-based charitable responses, like food banks and soup kitchens, that are not as effective as public policy in addressing these issues. A well-designed universal basic income program, that doesn’t subsidize employers in paying low wages or inspire cuts to other social services, is a public policy intervention with the greatest potential impact for addressing severe food insecurity.

I know what it’s like to be hungry and feel the shame that we bestow upon those who are materially poor. It’s awful. I know what it feels like to go to school without lunch and to be forced to hide my hunger. No one single person in a country as wealthy as Canada, that boasts such a high quality of life, should accept that we have 1.1 million food-insecure children.

Our research shows that my childhood experience is a direct result of being born Black. That won’t change, but it is possible to reform the systems that are anti-Black. The issues that we face are not insurmountable or inevitable — they are held in place due to a lack of political desire and ambition to effectively address them. It’s time to put systemic Anti-Black racism and food insecurity where they belong — in our history books.

Paul Taylor is the executive director of FoodShare Toronto, Canada’s largest food justice organization, and a candidate for the NDP in Toronto’s Parkdale-High Park riding.

Nearly one third of people that have gone back to work after being laid off during the coronavirus pandemic have lost their jobs again, study finds