When the pandemic hit in 2020, Debbie Wilkerson decided to retire early from her job at Jack-in-the-Box.

But it wasn’t really by choice, said the 64-year-old Tacoma resident. With schools shut down, she needed to home-school her 13-year-old grandson, James Carcione, who is on the autism spectrum, while her son continued to go to work.

Already struggling under a crush of debt — a hodgepodge of overdue bills, collection calls, court fines — the Wilkerson family’s financial precarity worsened during the pandemic. They made just $22 too much each month to qualify for many COVID-19 rent and utility relief programs, she said.

“When you’re living check to check, you know, it’s hard to catch up and pay it off,” she said.

But then the family caught a break. Wilkerson’s family was selected as one of 110 households in Tacoma to receive $500 a month for 12 months as part of a guaranteed income program. Called Growing Resilience In Tacoma, or GRIT, the program distributed the final cash payments to families last month.

Led by the city of Tacoma and local nonprofit United Way Pierce County, organizers described the guaranteed income program as a radical rethinking of the social safety net, offering families barely managing to scrape by the opportunity to lift themselves out of the cycle of poverty. Efforts at the state level are underway that could bring a similar program to other Washington residents by June 2024.

Unlike typical government welfare programs, Tacoma’s guaranteed income program provided funds to families with no strings attached, with advocates arguing that individuals know how to spend money in the way that best serves their household and well-being.

Critics of guaranteed income programs argue money without conditions would discourage people from working or becoming self-sufficient. They also raise concerns about the costs of such programs. Some warn small cash payments can’t be a panacea for rectifying generations of income inequality, poverty and racial disparities, and are wary of guaranteed income programs replacing other long-established public benefits like food stamps.

“These additional resources are making a difference to families, they are able to take control of their lives, it brings a sense of dignity,” said United Way Pierce County President and CEO Dona Ponepinto.

For Wilkerson, the money each month has been transformative. She’s been able to pay off her family’s debt and clean up their credit reports.

Her dream of buying a house that she can one day pass down to her grandson finally feels achievable — she and her son now qualify for a mortgage, she said.

“It was a blessing for our family,” Wilkerson said. “I never thought that it was even possible or in our sight.”

Floated as a theory among some academics and activists for decades, support for no-strings-attached direct payment programs has swelled in recent years, cropping up in dozens of cities and counties in the United States.

All 110 GRIT participants were employed, single-income-earner households with children, living at between 100% and 200% of the federal poverty level. In many cases, these families make too much to be eligible for public assistance, but still cannot make ends meet, said Tacoma Mayor Victoria Woodards.

The recipients are “people who get up every day and go to work to make a better life, but are just a penny over the poverty level [and] can’t take care of a $500 emergency,” Woodards said.

About 31% of Pierce County residents are just above the poverty line but make less than what it costs to make ends meet, and lack the wealth and savings to weather financial crises, according to United Way Pierce County data. In Tacoma, the number is closer to 40%, making the city an ideal place to test out guaranteed income, the organization said.

“So many programs out there are meant to help families, but really it’s helping to manage their poverty, they’re not moving them [to] where they are sufficient and don’t have to rely on public assistance,” said Ponepinto of United Way Pierce County.

The final report on the program — which will include details like changes in employment, education attainment, mental and physical health and family relationships — will be released in summer 2024.

But GRIT director Abigail Lawson said preliminary evidence and anecdotes from recipients have already proven the success of a guaranteed income program.

Lawson acknowledged $6,000 over the course of a year might not seem like a life-changing amount of money. But it is enough to avoid picking up a second or third job, or to clean up a family’s credit, or to stave off the impacts of inflation, she said.

Organizers also have seen the money support a higher standard of living, helping families afford a day out at the roller-skating rink or tickets to a Mariners game. One parent paid for tutoring classes for their children. In another case, a family traveled across the country to attend the funeral of a loved one. The extra cash allowed one recipient to take certification tests and qualify for a promotion and raise.

With high inflation and growing economic precarity, guaranteed income has become more pertinent and necessary as a stabilizer, Lawson said.

“When you’re looking at how people are lifting themselves out of poverty, that is a huge game-changer,” Woodards said. “It’s showing that it’s possible.”

The GRIT program received $600,000 from the Mayors for a Guaranteed Income coalition to administer and distribute payments.

The coalition has launched localized programs nationwide, following in the footsteps of a pioneering guaranteed income experiment in Stockton, California, which ran from February 2019 to June 2020.

Researchers found the lives of participants in the Stockton program measurably improved — compared to nonrecipients in the control group, individuals who received payments were healthier and happier, employed at a higher rate and could more easily handle sudden, unexpected expenses.

While GRIT organizers say their program proves guaranteed income is a viable plan for reducing poverty, they note city-level programs like GRIT funded through private grants are not sustainable. United Way Pierce County and Tacoma officials say they will advocate for a statewide program in the coming months.

Momentum has already been building. In 2021, a state work group recommended creating a pilot guaranteed income program as part of a 10-year poverty reduction plan. In June, the Washington State Department of Social and Health Services released a feasibility study, estimating a two-year pilot would cost between $65 million and $244 million.

Last year, state Rep. Liz Berry, D-Seattle, sponsored a bill that would give monthly payments to very low-income adults for up to three years that cover the fair market rent of a two-bedroom apartment in their area — roughly $2,000 in Seattle, $1,500 in Tacoma and $1,100 in Wenatchee.

While that bill died last year, advocates say the proposal was mostly intended to generate buzz. With the state feasibility study in hand, Rep. Berry has already pre-filed a bill this year to fund a Washington state pilot program that could include up to 7,500 participants.

“Guaranteed Basic Income is a proven strategy to reduce poverty by offering participants the freedom and dignity about how best to provide for their families,” Rep. Berry said in a statement. “It’s a smarter, more compassionate, and less expensive way to give people basic help.”

As for Wilkerson in Tacoma, she’s since returned to working at Jack-in-the-Box part time, doing prep work in the morning to bring in a little extra money. But having paid off her family’s debts, Wilkerson no longer feels the same financial pressures she did before the GRIT program, and doesn’t plan on returning to work full time.

Though the GRIT program has ended, its benefits will have lasting impacts on Wilkerson’s family and their futures, she said.

“Even that little more money was a help,” Wilkerson said. “We knew it was going to go away, so we’ve been thinking, ‘How are we going to fix this, pay for that?’ … It helped us financially work things out where we could still go forward.” 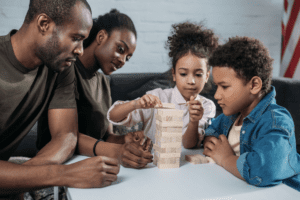 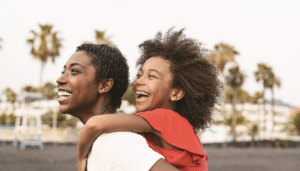