Gallup survey of 10,000 adults shows three-quarters of the UK and Canada now support UBI and almost half in the US

WASHINGTON, D.C. — A recent survey by Gallup and Northeastern University finds a slight majority of Americans opposed to a universal basic income (UBI) program as a way to support workers displaced by AI adoption. Conversely, about three-fourths of residents in the U.K. and Canada favor the idea.

These findings come from a Gallup/Northeastern survey of over 10,000 adults in Canada, the U.K. and the U.S. conducted from April to June 2019. By some estimates, up to 50% of jobs are expected to be automated within the next decade. An OECD study across 21 countries suggests that while only 9% of jobs are currently at high risk of automation, low-skilled workers are most vulnerable to job displacement.

The way that colleges, universities, governments and businesses can respond to this disruption is the topic of a recent report by Gallup and Northeastern University detailing the results of the three-country survey. The probability-based survey was conducted online with 4,394 Americans, 3,049 Canadians and 3,208 U.K. adults.

In the survey, UBI was defined for respondents as a government-instituted program that would provide every adult with a specific amount of money each year. These funds would serve as income support for people who lose their jobs or occupations because of advances in artificial intelligence. UBI programs have been endorsed by U.S. Democratic presidential candidate Andrew Yang, as well as high-profile business leaders such as Richard Branson and Mark Zuckerberg. 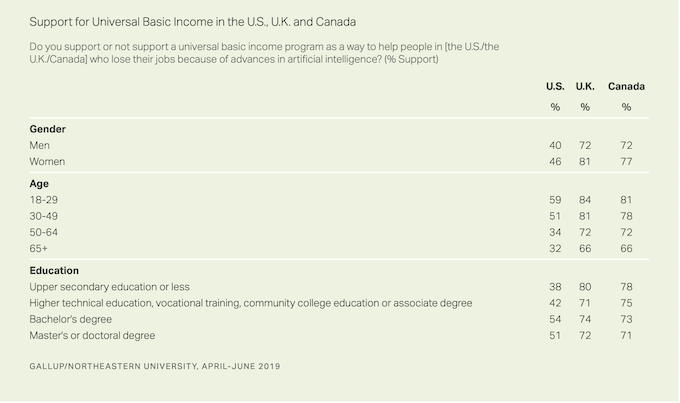 Do you support or not support a universal basic income program as a way to help people in [the U.S./the U.K./Canada] who lose their jobs because of advances in artificial intelligence? (% Support)

Gaps in support for UBI among the three countries surveyed may be due to the tradition of more robust social safety nets in the U.K. and Canada than in the U.S. However, despite the differences in overall support, there are some similarities in age group patterns. In general, younger residents in each country are more supportive of UBI than older residents are, with at least eight in 10 young adults (aged 18 to 29) in the U.K. and Canada — and nearly six in 10 in the U.S. — supporting the idea. By contrast, support is about 15 to 30 percentage points lower in each country among those aged 65 and older.

Are Supporters Willing to Pay Higher Taxes for UBI?

In a follow-up question, UBI supporters were asked if they were willing to pay higher taxes to fund such a program. Support for this varies, from 75% in the U.S. to 53% in the U.K. and 49% in Canada. 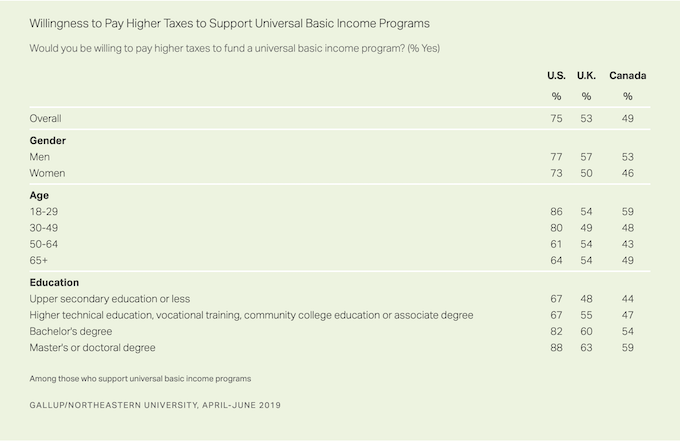 Would you be willing to pay higher taxes to fund a universal basic income program? (% Yes)

Among all subgroups of UBI program supporters, those in the U.S. are more willing than those in the U.K. or Canada to pay higher taxes to fund such programs.

Common Views That Companies Should Pay 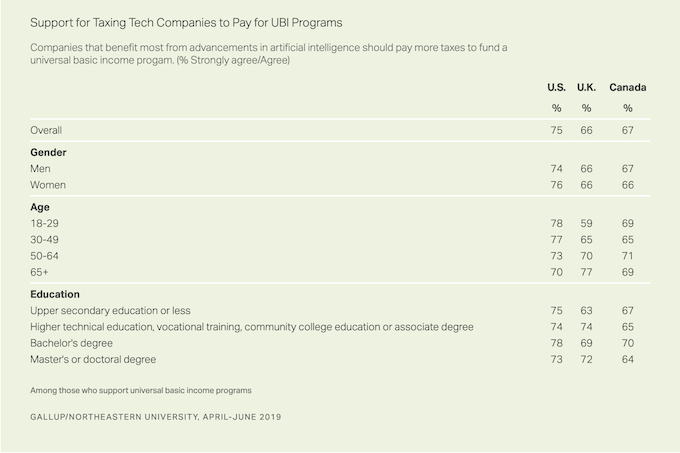 Companies that benefit most from advancements in artificial intelligence should pay more taxes to fund a universal basic income progam. (% Strongly agree/Agree)

UBI programs have garnered substantial attention in recent months, in part because of Yang’s endorsement of them. The Democratic presidential candidate has backed such programs to help Americans who experience job loss due to the introduction of new technology. The concept has been piloted on a limited basis in several locations worldwide, with mixed results. However, this hasn’t dissuaded UBI supporters from promoting these programs as necessary tools to offset the potential disruption caused by AI adoption and other technological advancements.

In all three countries, views on UBI programs could change as the effects of AI adoption become increasingly disruptive to workers.

Results from the United States are based on self-administered web surveys with a random sample of 4,394 U.S. adults, aged 18 and older. Sample was drawn from the Gallup Panel, a probability-based panel that is representative of the U.S. adult population.

The U.S. survey was conducted between April 25 and May 9, 2019. Gallup sent survey invitations and reminders to panel members who were selected into the sample. The response rate among panel members sampled for this study was 37%.

Sample data were weighted to minimize bias in survey-based estimates. The weighting started with the panel base weight as the initial weight. Base weights took into account the probability of selection into the panel for all stages of selection. Next, post-stratification weights were created to adjust for nonresponse bias. Nonresponse adjustments were made by adjusting the sample to match the national demographics of gender, age, race, Hispanic ethnicity, education and region. Demographic weighting targets were based on the 2017 Current Population Survey figures for the aged-18-and-older U.S. population.

For results based on this sample of U.S. adults, the margin of sampling error is ±1.93 percentage points at the 95% confidence level. Margins of error for subgroups are higher. All reported margins of sampling error include the computed design effects for weighting.

In addition to sampling error, question wording and practical difficulties in conducting surveys can introduce error or bias into the findings of public opinion polls.

Results from Canada and the United Kingdom are based on self-administered web surveys from an opt-in sample provided by Dynata of 3,049 Canadian and 3,208 U.K. adults, aged 18 or older.

LVT-UBI on the ballot in New Zealand

Mayors in Greece positive to pilot Basic Income, if supported financially and institutionally