On June 27, history was made when during the second night of the first U.S. Presidential debate for the 2020 Democratic Primary, Andrew Yang explained on the national debate stage the importance of a universal basic income floor for all citizens of $1,000 per month, rich or poor, employed or not that he’s dubbed the Freedom Dividend. Prior to Thursday night, the idea of a basic income guarantee had not been debated since 1972 when George McGovern was running on a $1,000 per person per year proposal ($6,231 in 2019 dollars) that he dubbed a demogrant.* 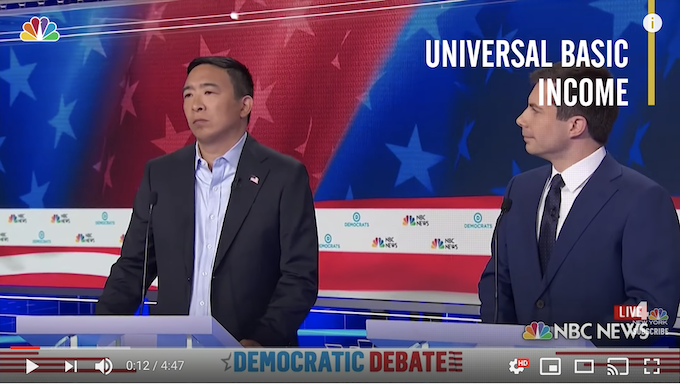 Asked how he would provide UBI, Mr. Yang responded by describing how a value-added tax (a consumption tax applied to each stage of the supply chain of a product, from production to its point of sale) at half the European level (10%) would put the American people in a position to actually benefit from technological innovations by getting an $800 billion slice of that revenue, that when combined with the economic growth of a trickle-up economy where people spend their basic incomes on local goods and services, and the economic savings of reduced costs of crime, poverty, and poor health, the Freedom Dividend is entirely possible. He also made sure to mention that the reason he believes Trump is President, is because of the millions of jobs that were automated away in the swing states, and that automation is only going to accelerate so it needs to be addressed.

Aside from two lightning-round-style questions asked of all candidates to answer with “one or two words only”, his question about UBI was one of only three direct speaking opportunities that were given to Mr. Yang by NBC moderators – two direct questions and his closing remarks – for a total speaking time of 2 minutes and 50 seconds, the lowest of all ten candidates that night. No other candidate was asked fewer questions, and this despite Mr. Yang having higher polling numbers than half the candidates on stage. 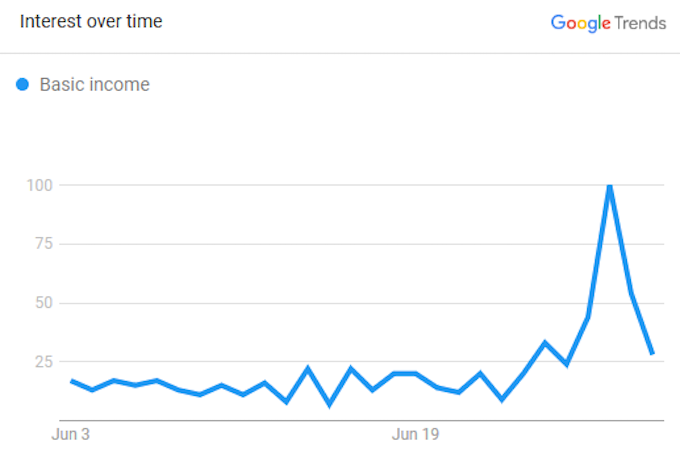 Average polling indicates that for the most part, NBC moderators appeared to have assigned questions according to polling rank, except in the case of Mr. Yang, who was treated like he had the lowest polling numbers. This was the kindling that was lit by the revelation after the debate had ended, that Mr. Yang’s microphone appeared to have been muted when he tried to respond to what was being said by other candidates. This accusation, despite being denied by NBC, was shared later by fellow candidate Marianne Williamson who also claimed issues with her own microphone. As a result, the hashtag #LetYangSpeak was born which quickly became a top trend on Twitter nationwide the following day.

Due to the top trending hashtag on Friday, and likely also combined with the near 150,000 retweets of the tweet he announced pre-debate where a share and a follow could win someone $1,000 a month for a year, Mr. Yang reported an all-time high in his site traffic and also surpassed the 130,000 individual donor limit for the next round of debates in September and October. Mr. Yang was also the only candidate of all twenty to gain more than 100,000 new followers on Twitter following the two nights of debate – an increase of 32%.

Additionally, NBC posted clips of each candidate and their answers on YouTube following the debates, and it was Andrew Yang’s clips which have earned more views than any other candidate, surpassing even Bernie Sanders.

All told, despite having received less than three minutes to talk to America about basic income, automation, and his list of over 100 policies, Andrew Yang appears to have been boosted by the first debate, and Google search traffic for basic income spiked by around 300%.

Many people just learned about the idea of UBI for the first time thanks to Mr. Yang’s first debate appearance, and with the second debate later this month, and fourth and fifth debates in the Fall (it seems likely he’ll also qualify for) the outlook appears good for both basic income and the realities of automation to increasingly become a part of the national conversation.

It’s even possible that even if Andrew Yang doesn’t go any further than the fourth debate, the discussion will continue. At a fundraising dinner over the weekend, Mr. Yang reportedly shared how Joe Biden had approached him after the debate and expressed wanting to talk to Mr. Yang in the future about the Fourth Industrial Revolution and what can be done about it, out of fear that the middle class could cease to exist.

It’s impossible to tell how far Andrew Yang will carry the UBI torch towards the White House, but keeping in mind that Donald Trump at this time in 2015 was polling at 1%, and with the knowledge that concerns about automation and the need for UBI are already spreading to other candidates, it seems that the candidacy of Andrew Yang may likely be looked back on by history as a key milestone in the implementation of a fully universal and unconditional basic income, whether he becomes the 46th President of the United States or not.

*Historical note: Not to be confused with UBI, McGovern’s demogrant was actually a negative income tax that proposed $1,000 to those earning $0 where $1 would be clawed back for every $3 earned. A household of four with an income of $12,000 ($74,771 in 2019 dollars) would have received nothing under his proposal.