Rep. Alexandria Ocasio-Cortez and other progressive lawmakers are calling for a significantly more robust federal-government response to the coronavirus than has so far been proposed by both Democrats and Republicans.

The House is preparing to vote on Thursday on a coronavirus-relief bill that would provide Americans with paid sick leave, food assistance, free coronavirus testing, and more substantial unemployment benefits.

But Ocasio-Cortez pushed for a more sweeping response, including expanding Medicare or Medicaid to cover all Americans, a freeze on evictions, a universal basic income, ending work requirements for food-assistance programs, criminal-justice reform, and freezing student-debt collection.

“This is not the time for half measures,” she tweeted on Thursday. “We need to take dramatic action now to stave off the worst public health & economic affects. That includes making moves on paid leave, debt relief, waiving work req’s, guaranteeing healthcare, UBI, detention relief (pretrial, elderly, imm).”

Ocasio-Cortez said the expansion of unemployment benefits wouldn’t help the many millions of Americans, including tipped and contracted workers, who are suffering economically as a result of the pandemic but aren’t necessarily losing their jobs.

A fight over the coronavirus response

Democrats are attempting to bring Republicans on board with the legislation, but the White House and GOP lawmakers are resisting it. 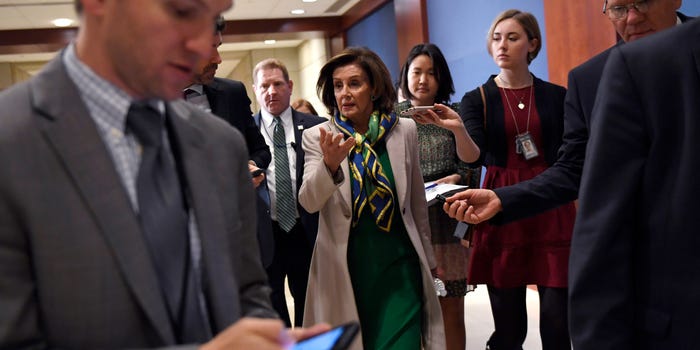 “We cannot slow the coronavirus outbreak when workers are stuck with the terrible choice between staying home to avoid spreading illness and the paycheck their family can’t afford to lose,” she said in a Wednesday statement.

On Thursday morning, Pelosi told reporters that Congress wouldn’t leave Washington without passing legislation to address the pandemic and resulting economic crisis. (Congress is scheduled to go on recess next week).

“We’re bringing this bill to the floor,” she said.

Meanwhile, the president has proposed a massive fiscal stimulus centered on a temporary Social Security payroll-tax cut that would add about $1 trillion to the national debt — more costly than both the 2008 Wall Street bailout and the 2009 stimulus bill designed to combat the Great Recession.

There is widespread bipartisan skepticism about the cost and effectiveness of Trump’s proposal, and it would face an uphill battle in the Democratic-controlled House. Critics say the payroll-tax cut wouldn’t be targeted enough and would disproportionately help higher-income Americans.

After calling for unity during an address to the nation on Wednesday night, Trump attacked Pelosi on Thursday morning for refusing to back his plan.

“Nancy Pelosi all of a sudden doesn’t like the payroll tax cut, but when Obama proposed it she thought it was a brilliant thing that all of the working families would benefit from because if you get a paycheck, you’re going to take home more money,” he tweeted, quoting a host of “Fox and Friends.”

How Universal Basic Income Could Save Lives in a Pandemic

Democrats retook Senate control after the Georgia runoffs. Here’s how they can get $2,000 stimulus checks to Americans and boost Obamacare — all without GOP support.

This Pollster Thinks GOP Opposition to $2,000 Checks May Have Cost Republicans the Senate