Basic income is paving a path to freedom in Kenya

Beyond Trafficking and Slavery: Tell us a bit about the basic income trial that Give Directly, your NGO, is conducting in Kenya right now.

Caroline: I’m very excited about this experiment. It’s an opportunity to test basic income in a non-Western setting, to bring it down to the South were the challenges of poverty are greater than the challenges mostly talked about in the West: automation, artificial intelligence, etc.

We are currently sending money to 20,000 Kenyans in different communities. It’s a randomised control trial, which means these 20,000 people are divided into three different groups. Those in the first group receive the basic income as a lump sum. In the second group, everyone 18 years old or older receives $22 per month for two years. Adults in the third group also receive $22 per month, but this time for twelve years. This experiment began a year and a half ago.

Both the scale and ambition of this project are truly massive. Now that you’re 18 months in, do you have some preliminary results you could share?

We don’t yet have statistical data, but we have already had many conversations with participants about how their basic incomes have impacted their lives, work, risk-taking, migration, financial planning, personal relationships, and even experiences with domestic violence.

In terms of work, we’ve been told that the basic income has given people their first feeling of what it’s like to be an employed person. To feel what you and I feel when we earn money every month. And what they say is that for the first time, they’re able to plan. They don’t just spend money at the spur of the moment because it came, or live each day as it comes. They plan for their month, and they are even working harder because they realise that this money has given them a head start. They need more than just what the money can offer. 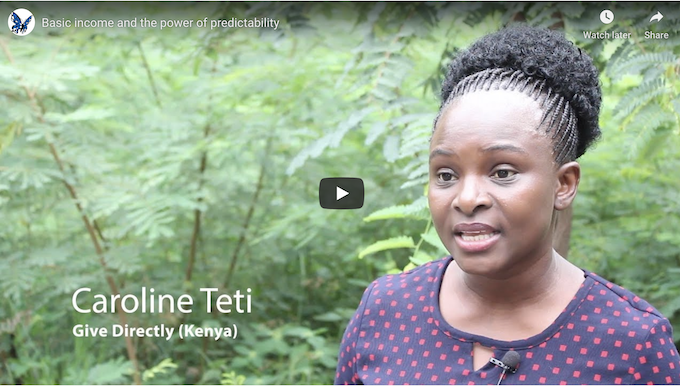 We have seen situations where recipients have moved from their original villages to small towns or lake sides to look for work. People who previously were grounded in their villages now say, ‘You know what? I have some little money. I can travel. I can afford a house for $5, and so I can take the risk to stay in a neighbouring town and look for a job. And if I get that job, it can supplement what I’m doing.’

I remember one lady who, the moment she started receiving the basic income, left her baby with her mother. For six months she went to the nearest town and started a small business. That business grew, and today she has taken back her baby. This money gave her a head start in opening a small business, and now that business can take care of the two of them.

We also see parents taking their children to school, responding to their medical needs, including taking out government medical insurance so that they can better handle risks. It’s as if basic income is giving people a new lease of life. I have seen them become vibrant, as if they’re living life anew. Why? Because basic income has increased the number of meals people take in a day. Nutrition has improved across board.

While fully acknowledging that these results are preliminary and anecdotal, it appears that the recipients are experiencing a positive, emancipatory effect in terms of autonomy and wellbeing. That confirms the results of some of the other trials that have taken place around the world.

I can’t agree more. Basic income is empowering, and especially if it is unconditional. By the wonder of basic income, people get a choice. They get their dignity back. It increases trust, it brings about peace, it promotes unity within the community.

Mobilisation within the community has also taken on a new dynamic. People come together to save or lend each other money, and are able to buy goods on credit because they know they can pay. That confidence and increased purchasing power helps local businesses to thrive.

One of the things that we’re particularly interested in at Beyond Trafficking and Slavery is this idea of freedom in relation to work. In your conversations with recipients, are people speaking about a change in experience in the world of work as a result of their basic income?

Most of the people were not working in the villages we’ve gone to. A few people had income of some sort, but I can say that over 90% of them did not have jobs. These are people who still had to find food, send their children to school, and occasionally go to hospital, yet they didn’t know where the next coin was going to come from. To mend that, they left their homes to go out and look for whatever came their way. Those whatevers ranged from making charcoal to working on construction sites or farms, cleaning people’s compounds, working as maids or servants. They had no choice but to accept what they were offered. 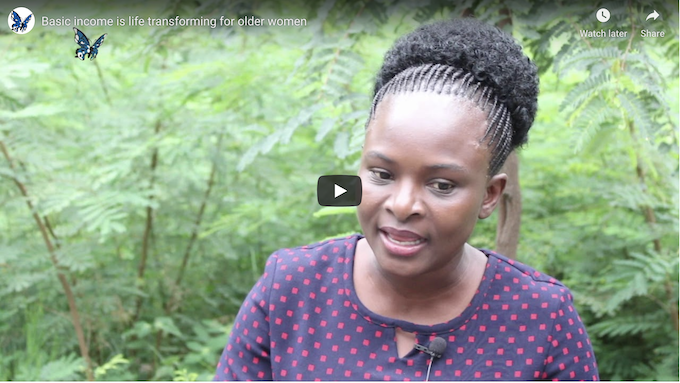 The population that has it the worst are elderly widows living with orphaned children. Life does not know if you’re old; you still have to be the caregiver. Old women have said to me, ‘I toiled, I have arthritis, my back is aching, but I had to go and work on somebody else’s farm so that I could bring my grandchildren food.’ That is where the story used to end for these women. But now that they have a basic income, they’re able to also say, ‘Today, I don’t have to do that. I took a little part of that money and started a small business in my house. People can come and buy what I make, and I use that money to feed us.’ For these women, growing the business into a big enterprise is not the dream. The dream is, at the end of the month, to start the cycle all over again. To have recouped the money they’ve spent so that they can feed themselves in the coming month as well.

It’s a really humbling situation listening to the stretches that people went to in the labour market to be able to provide for themselves and their families. Getting a basic income has changed that dynamic. It has given them the freedom to find alternative work that they think is more rewarding.

It’s inspiring and exciting, and it makes me wonder what this might mean for advocating politically for basic income in Kenya if the results remain as positive.

We pray that the results remain positive, and strongly positive for that matter. If they are just positive the advocacy angle will be very difficult. If they are strongly positive, then it means we will be starting from at a different level. What I am riding on right now and hoping will be sustained is the fact that, in Kenya, the government already has a social protection programme targeting old people, orphans and vulnerable children, and people with disabilities. This means that the government has already dedicated resources from the exchequer that go to this population every single month. The value is not so different from what we’re giving as a basic income.

For any advocacy to be successful we need to find a policy perspective that makes basic income attractive to policymakers and to bureaucrats. In Kenya’s case, that might mean letting them see the cost-benefit analysis and the economic advantage of a basic income over this other programme. It shouldn’t replace public service provision like health education, but it could be a scale up alternative for other types of existing government safety net programmes.

Basic income by its nature is a disruptive idea. It’s disruptive because when it comes, people have to make significant changes in the way they think about public policy, social policy, development programmes. At this point, people in the basic income space need think about re-packaging the evidence these pilots are producing in a way that is easy to consume for policymakers and for citizens. It can’t remain a boardroom affair and an academic affair that only a few people talk about. We need to start building global momentum, and that for me is a rallying call.

This feature on basic income was financially supported by a grant from Humanity United.

Advocates in Nashville tout the results of guaranteed basic income