Assistance Secretary-General of the UN: ‘UBI is the best solution to stopping economies tipping over the edge’

Kanni Wignaraja, Assistant Secretary-General of the United Nations, speaks exclusively to Kylie Grey for Dateline, about why Asian countries must rewrite the rule book to survive post-pandemic Asia.

BY KYLIE GREY for DATELINE

The twin shocks of a public health crisis and economic weakness are already hitting hard in the Asia Pacific. According to the World Bank, over 20 million people in the region have been pushed into poverty as a result of the COVID-19 pandemic.

This year the Human Development Index – measuring income, health, and education – is expected to plummet, the first decline since records began in 1990.

The United Nations Development Programme says 80% of children in the Asia Pacific have not had access to education this year as a consequence of the pandemic. In a matter of months, the pandemic is wiping out gains in education and human development that have taken years to build.

“It is against this background that we seriously need to consider implementing a well-designed UBI (Universal Basic Income),” UNDP’s  Balazs Horvath and Kanni Wignaraja urge in their recent op-ed on UBI and social equality.

How would a UBI be implemented in Asia?

A Universal Basic Income (UBI) is a regular payment from the state to all adult individuals. Its purpose is to allow people to meet their basic needs. It is provided with no conditions attached, regardless of whether or not the recipient earns an income.

Speaking to Dateline, the Assistant Secretary General of the UN, Kanni Wignaraja said,

“For us (the UNDP), Universal Basic Income should be temporary and targeted to two groups: the group that is already below the poverty line and a second group that,  because of COVID-19, has been pushed back into poverty.

“If you put both these groups together, we’re talking in the region of 60% of people who don’t have any form of social protection.

“With UBI, we are looking at a bridging mechanism so people have a basic, decent living with food, security and shelter, where they can take care of themselves and their families.

“UBI is the best solution to stopping economies tipping over the edge. But it’s not a magic bullet.”

Ms Wignaraja feels that an alternative, without a UBI, is worse.  In a recent  op-ed on UBI and social equality. “It could mean the rising likelihood of social unrest, conflict, unmanageable mass migration, and the proliferation of extremist groups that capitalise and ferment on social disappointment.” In the wake of the 2008 financial crisis, the concept of a UBI returned from the fringes of economic debate to become a policy proposal that was seriously considered by many countries, including Australia. Concerns about automation, including AI and robots permanently replacing many jobs have given further impetus to the concept.

But, as it has done on so many fronts, the sudden advent of the COVID-19 pandemic has ripped up the rule book. It has brought a “utopian fringe idea very much to the front and centre of fiscal policy debate for many countries”, says Wignaraja .

Canada is half-way there, having already implemented a temporary UBI. The Canadian government is giving every adult citizen CAD$2,000 per week to help them get through the pandemic, which the government acknowledges is the biggest health-care crisis in the country’s history.

The Spanish parliament has very recently agreed to a UBI which will provide one million Spaniards with a universal basic income for life.

“How did this all start in the first place?” asks Ms Wignaraja. “Mismanagement of fragile ecological zones, how we interact and manage our environment and how we protect nature, is a huge gap that has been exposed.

“The pandemic is also exposing inequalities and vulnerabilities of huge populations in the region. This includes informal workers – estimated at 1.3 billion people or two-thirds of the Asia-Pacific workforce – as well as migrants.

If a large part of an entire generation loses its livelihood, with no social safety net to catch it, the social costs will be unbearably high.”

The question says Wignaraja, “should no longer be whether resources for effective social and protection can be found – but how they can be found?”

Until now, a key argument against implementing a Universal Basic Income was its drain on government finances.

But what if the money is already there? Can existing government spending be effectively reallocated, so that it is spent more efficiently to support both human development and the environment?

“So in Asia, a good start would be eliminating fossil fuel subsidies which would  have the added benefit of helping us achieve climate change targets,” says Ms Wignaraja.

Instead of looking for work in developed nations like Australia, the pandemic has forced millions of Asian migrants to return home.

“Because of COVID-19, we have seen a trend of migrants returning to their home countries. If UBI is part of the re-boot of economies in the Asia Pacific and we can create jobs that are safer and greener we would see millions of young people staying in their own country,” says Ms Wignaraja.

“Take China, for example. In the last year, more jobs were created in the renewable sector than in the fossil fuel sector. The move toward greener, safer, cleaner jobs is a trend that we will see increasingly in Asia. I think this a huge lure for young people too.”

The introduction of UBI in the broader Asia-Pacific region may therefore be good news for an Australian government which is looking to avoid a mass influx of economic migrants as pandemic restrictions are eased.

“Suddenly I had nothing coming in. I haven’t earned a cent for a few months now.” 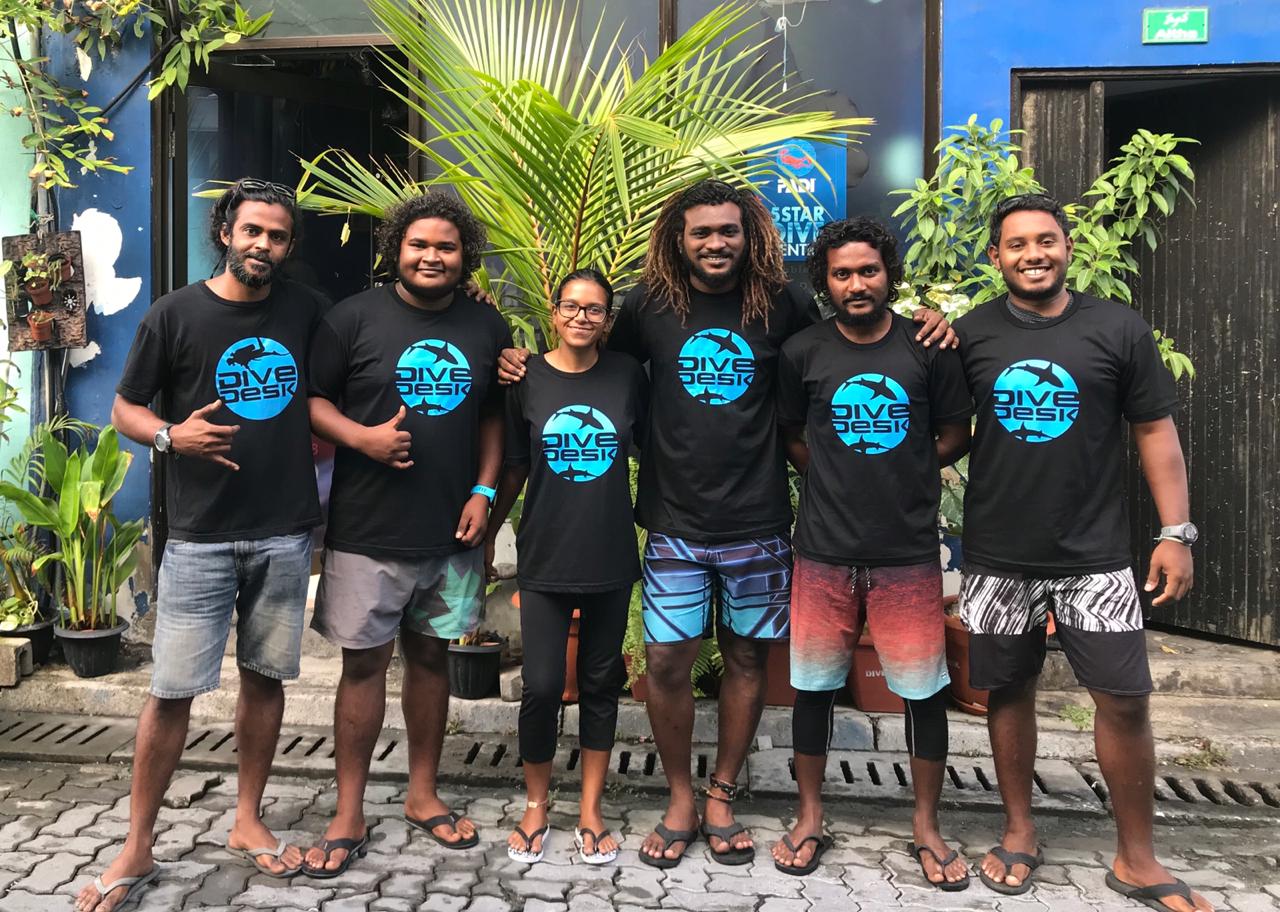 For six years, Adam Ashraf has run a popular diving business in the Maldives capital Male with his wife Nadah. They have two young sons Ryan (6 ) and Yuan (7).

Their business Dive Desk Maldives was thriving and busy, offering diving lessons and tours, training diving instructors as well as providing  diving supples and repairs. Ashraf, who is also passionate about protecting the marine environment, worked closely with NGOs and the government interested in protecting the ocean and marine life.

Over six years he had built the business up from nothing, investing in equipment and training every time there was a little extra left over.

“I always had enough money to pay the rent, utility bills and feed my family.”

After six years we had saved almost enough to buy a small diving boat”.

“The lockdown happened abruptly,  and suddenly I had nothing coming in. I haven’t earned a cent for a few months now.”

The Maldives’ strict lockdown laws means it is not possible to find other work. The family needs a police permit just to do the shopping.

Nadah is not earning anything either. She gave up her government job a few years ago to work in the business with Ashraf and devote her time to bringing up their two young boys.

Like Australia, the Maldives government is offering financial support for small business.

Ashraf put in his application months ago.

“I tried to get government support for my business three months ago but haven’t had a response from them yet.”

He says there is a lot of paperwork involved and the government wants to see regular payroll slips.

“As a small business owner I often didn’t pay myself or I used my pay to invest in equipment so I don’t have regular payslips to show the government.

Adam is sure that is why he has not had any support from the government.

“I think the government should be more lenient with their application rules and help everybody in a time like this.” he says.

“My wife and I wait until the kids are sleeping to talk. I don’t want the kids to see how stressed and worried we are.

The pandemic has hit the Maldives economy particularly hard. The country is vulnerable because so many of its citizens are reliant on the tourism industry to survive. The World Bank says 2/3 of the country’s GDP comes directly or indirectly from tourism. The  industry has been virtually wiped out overnight by COVID-19.

The Maldives is one of the developing Asian countries where the UNDP would like to see the swift introduction of a UBI (Universal Basic Income) to prevent families like Ashraf’s from falling into poverty from which they may never recover.

I asked Adam how a Universal Basic Income would help his family.

Without hesitating he said, “It would take the stress away. I would be able to feed my family three meals a day. I wouldn’t have to think about how we are going to survive up until the end of the year without an income.

“I would be able to keep my business so when the pandemic is over we can employ people and start again.

For now, with no money coming in, Ashraf says he can only survive a ‘a maximum of three months’.

“My wife is very strong but I don’t want to give her all my stress.

“I am exhausted because of the worry.

“Many people are saying we all have to live like this until the end of the year.

I don’t know how we are going to survive until then.

Letting go of a toxic relationship

Asia has one of the youngest populations in the world. The UNDP warns that if we don’t take the necessary steps now to protect this population, we’re risking a tsunami of poverty on a scale never previously experienced – a tsunami from which the region will struggle to recover.

For leaders wrestling with the greater good of their peoples against powerful vested interests, notably the fossil fuel industry, the UNDP sees the COVID-19 pandemic presents a unique opportunity to begin again.

Like a toxic relationship, it can be painful to let go of the status quo. But once it is left behind, there’s space to embrace a more secure, healthier and happier future. A UBI could be the key to catalyse that transition. Adam Ashraf and his team at Dive Desk, Maldives
Dateline

Is The GOP Becoming More Supportive of Direct Cash Payments?

24% of unemployed workers have been jobless for over a year

For a better, faster recovery: €1,000 checks for Europeans