It’s time for corporate profits to return to the ’90s so companies can make up for decades of underpaying workers, Morgan Stanley says

OAKLAND, Calif. – In June, the city of Oakland launched one of the largest guaranteed income pilot programs in the nation.  The premise is simple: provide 600 low-income families in Oakland with $500 a month for 18 months, no strings attached.  The idea is to battle wealth inequality and combat poverty.

The money for the program is funded with donations from Blue Meridian Partners. The non-profit “UpTogether” runs the program and it’s been dubbed “Oakland Resilient Families.”

Phase one of the pilot includes 300 families from East Oakland.

Terran Johnson, one of the recipients picked for the program, told KTVU about the impact he has felt.  “It was almost unbelievable at first, I was just like, is this real? I’m going to see if it’s real, if I find someone I know that’s a part of the program.”

Johnson works as an after-care specialist, assisting homeless families transition into permanent housing. It’s a career he’s well-equipped for based on his own experiences. He grew up in the city’s foster care system and experienced stints of homelessness.

“Being hands-on with families that have come through something I’ve come through and being able to help them, makes me feel really, really rewarded, it’s fulfilling,” said Johnson.

Fulfilled, but like many in the Bay Area, he is not always able to keep up with the high cost of living. He’s been spending the money to put food on the table, pay bills and help with the rent.”

You’re so used to things sometimes going wrong so I’m just hoping that nothing goes wrong and continues to go smoothly,” said Johnson.  “Because this is a blessing, it really is.”

Noe Salgado is also part of the first group of 300 families. He’s a father of four and works as a material handler. He’s seen his hours cut due to the pandemic. He says he’s also been able to use the money for necessities like taking care of his kids.

“I feel relief,” said Salgado. “I can sleep a little more comfortable at night. Hard being the head of household. Maintaining the bills, there’s not always a lot of resources but we have to find a way to do it.”

Oakland recently announced an expansion of the pilot, opening up applications for phase two–another 300 eligible families will be selected.

“Poverty is policy failure, not personal failure,” said Oakland Mayor Libby Schaaf at a news conference announcing the second phase.  “We have to accelerate economic mobility as well as close the racial wealth gap.”

Similar programs have launched around the Bay Area, the state and the country following the city of Stockton’s pilot in 2019. Supporters say guaranteed income is a way to battle poverty and tackle income inequality. Critics cite the high cost of such programs and say, it could lead to people working less. 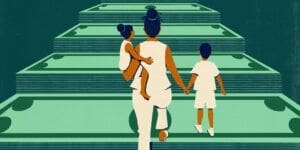