“I’ve been influential my whole damn life, and I think people owe me for it. People like my data. I’m the blackest black guy the United States has ever produced. I’m from Detroit. So, whatever cool comes from that culture, they owe me and people like me”

Raised in Detroit and running for Congress in New York’s 13th District, Keith is a major proponent for a Universal Basic Income (UBI) that gives citizens an asset holder stake in American companies that profit from not only their data, but from their culture as well.

“I’m pro UBI. It’s a cornerstone in my campaign,” says Keith, who also likes to go by his initials, JFK.

“Every modern person who is leveraging a UBI as a part of their political platform has based it on something that I’ve written,” he adds.

Keith sees Universal Basic Income as “something that is unconditional — a human rights issue based on the productivity of society.”

Universal Basic Income: Where Does the Money Come From?

People have mixed reactions to the idea of a Universal Basic Income. Some see UBI as another form of welfare. Some see it as a tax, but perhaps the biggest question is where does the money come from?

It is all centered around data, culture, and giving citizens a stakeholdership in American companies that profit from the data and subsequent productivity of every citizen.

“The money is a dividend on productivity,” says Keith, who used to be an opponent of UBI “because of the connotations.”

“I’m not necessarily leveraging the government to tax corporations. What I am doing is creating a workaround for there to be a new ‘asset holder class.’ Right now in corporations you have shareholders, and I’m trying to add a new stakeholdership via everyone who has contributed anything to the productive measures of an institution.

“If you are a company and you create $100 worth of productivity at the end of the year — and let’s say that productivity is revenues, to be very specific, after you pay off your expenses and you pay your taxes, then there’s a dividend that’s due to your ‘stakeholdership class.’ That is where an accumulative measure becomes the UBI.

“A Universal Basic Income means that we can create a universal ownership stake in productivity, because we know that while your data is intrinsically valuable on its own, because you exist, it is more valuable in costs. We know that paying people $5 for Facebook data is not valuable, but what Facebook really gains value out of is knowing your caucus and your degrees of separation.

“As they take that on, we don’t want Facebook to pay you $5 upfront, what I want is for you to have an equity stake in their productivity and a residual income from that equity stake.

“I want that across the 5.3 million companies here in the United States. It’s not about Facebook and Amazon. Every single company on the face of the planet is a personal data company.

“At any point that they publish evidence that they are leveraging knowledge or information from an individual, be it an employee or a consumer, they owe us a piece. And that’s where our campaign is firmly established as ‘we owe us.’”

Universal Basic Income is Not About Employment, It’s a ‘Piece of Mind’ 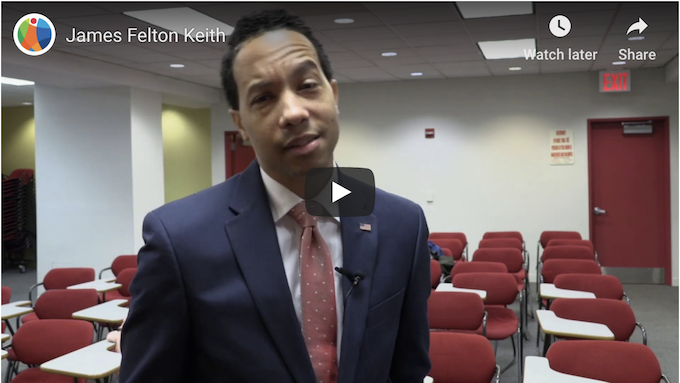 JFK’s vision for a UBI is not about trying to get the unemployed to be employed, as were the unsuccessful trials in Finland and Canada, where the main takeaways were that UBIs make people more trusting of the government, happier overall, but still jobless.

Keith sees a Universal Basic Income as a means to provide a liftoff for people to feel some security and to figure out what they want to do in life.

“It’s not about unemployment anymore,” he says, adding, “the reality is there’s not an employment problem — at least not in countries like the United States and the hyper-developed Western world — the problem is the jobs that we have don’t pay anything.

But JFK has not always been a fan of UBI; in fact he used to be against it.

“The objective is to give folks enough relief to start on their journey.

“$1,000 per month is just a start. There will still be industry silos like education, cyclical goods, energy, media, you name it, and we design-in a lot of other compensation per productivity in those silos.

“A UBI is a liftoff. It’s the initial runway for you to get started to figure out ‘what I’m going to do,’ or to buy yourself some time to say, ‘I at least know that I can pay my rent — or in New York, half of my rent!’ Or at least know that a $500 emergency is not going to kill me.”

The Role of Automation in the Universal Basic Income Discussion

Although automation plays a role in speeding up the discussion about a Universal Basic Income, UBI is a topic that has been on the table for many years.

“If we pay a UBI, we will create more jobs”

“As a politician I recognize that there is a rhetorical opportunity here to talk about the lack of money in our economy because of automation because it is automating away our understanding of wages for the jobs that exist,” says Keith.

“UBI should be going forward if automation didn’t happen,” he says, adding, “The House produced a recommendation for UBI 50 years ago. It would go ahead regardless, but the political opportunity is that it is now more needed than ever because automation is upon us.”

The idea of having an equity stake in a company because it uses your data is expanded even further. In JFK’s mind, culture, too, is a valuable data point, and anyone who profits from a culture should give that culture a cut.

“They have to indemnify us”

“I’ve been influential my whole damn life, and I think people owe me for it,” says JFK.

“People like my data. I’m the blackest black guy the United States has ever produced. I’m from Detroit. So, whatever cool comes from that culture, they owe me and people like me. Same as with any other culture — Irish culture, Lebanese culture and their food, or wherever it’s from — culture is everything and now culture is starting to become data points and we can see it.”

Inclusionism is a major part of Keith’s platform, which has three core principles:

“When Mary Barra, who’s the CEO of General Motors, is worth 253 times her employees, and they’re a failing company, and tax payers like me finance them, so that they can exist, I think that’s ridiculous. And I think that she owes me some money,” he says.

Likewise, Keith wants us to have a stake in Jeff Bezos’ operations.

“I know Jeff Bezos is probably worth $50 million. I know for a fact that he’s not worth $150 billion. The rest of that money is mine. You can’t be a corny guy, put on a nice vest, and just because you build a good business process, which is your actual skill set as a processor — say that you are entitled to all of our value.”

“They have to indemnify us. This information has been used. It has created productivity, and now that it has, it owes us a stake.”

The World is a Supply Chain

JFK sees the world becoming a supply chain and that we need corporations and their supply chains in order to function as a society.

“With regards to automation, what we’re seeing in the world is that the world is becoming a supply chain — a supply chain of a really efficient series of institutions who supply us with a variety of things whether they be in media or health or cyclical goods or energy, you name it. And as they become that our problems aren’t similiar to the old world where we can just break up large institutions to regain some control,” says Keith.

“I’m thinking about Elizabeth Warren’s rhetoric around breaking up the big tech companies in the same way we did Standard Oil about a hundred years ago, and the reason that won’t be effective is because if we look at Amazon for instance, or Facebook, we absolutely need those large supply chains because via the supply chain is the only way that we’ve been able to make products and services cheaper and to facilitate the needs of society.

“I think the solution is giving people more equity in the productivity that those firms create and what I’m doing by saying ‘more equity’ is I’m creating more democratic structures inside those institutions that are starting to — and will become — the size of nation states.”

As tech companies grow rapidly and become more profitable than some countries’ GDPs, can government keep up with the innovation?

According to Keith, “Companies are always going to be ahead because you have outliers and entrepreneurs that are looking for opportunities in the market to fill a void. That’s not a bad thing. I think part of Americana is that we have a method in place for us to move faster than everyone else.

“Government can keep up enough, but the problem is you cannot have 70 and 80-year olds making the decisions.

“I think it is the job of people between 35 and 65 to do the work, go to work, raise the kids, etc, but it’s just like a family. As my parents become elderly, I’m questioning if they should be driving. I don’t want to take away their freedom of autonomy and choice, but I do recognize that we’ve passed the point at which I’m willing to receive advice on operational issues from them.

“If the culture changes too radically, then you have to replace the decision makers from that culture. Our real failures as a country are specific to our democracy and the courage with which we empower people to make decisions. It’s not really a failure of good commerce versus bad commerce and our ability to have oversight. There are plenty of people who could fill up those in the congress and the state legislatures to make better decisions.”

“Our digital lives are not separate from our lives”

So, how do we maintain our privacy in the digital world where data is not, according to Keith, the new oil, but rather “the new matter?”

“Data is everything that matters everywhere!” he says.

“The way we fight back is that we have to have more human rights policy around the data points of our lives because our digital lives are not separate from our lives. We have to be able to enforce a core human-centric and transhuman-centric policy, so that people aren’t railroaded in favor of institutions of people.

“This is really about getting the 70-year-olds out of office and quashing all conservatism — to say that people should have autonomy and choice. We will not beat it with some technological solution.”

Disclosure: This article includes a client of an Espacio portfolio company. The Sociable does not side with nor endorse any political party.

A guaranteed basic income could be a stabilizing force for Canada

UBI can help LGBT+ people and it’s on its way

The pros and cons of universal basic income

Opinion: It’s time to transform our society with a basic income guarantee