Why we should all have a basic income.

Universal basic income ‘would cost less than value of benefit cuts since 2010’.

The documentary, ‘UBI, our right to live’, now available online

The film directed by Álvaro Orús and promoted by Pressenza and Humanists for Basic Income, was premiered at the European Humanist Forum in May 2018, in Madrid, and has now been translated into seven languages and been presented in several continents.

To mark International Basic Income Week, the filmmakers have made the film available to the general public through Pressenza’s youtube channel.

The film explains over the course of 41 minutes what basic income is, what it is not, what the differences are with the minimum wage or social security, what are the advances in public awareness, pilot studies, the possible consequences of its implementation, and the resistances faced on the way, among other things.

The film is the product of the collective and voluntary work by the director Álvaro Orús, the musician David Bazo, those who have been translating, recording voice overs, and been involved in promotion, etc. It is an essential resource for finding out about what more and more people claim as a universal right, the prime universal right, because it is about the right to subsistence. Something that is a growing possibility today because of accumulated wealth and technological advances, leading to less traditional employment.

When technological advances leads to massive unemployment, while at the same time more wealth is being generated, humanity is faced with a question: How will we solve the subsistence of a growing percentage of the population if we do not tackle the relationship between wages and survival?

UBI, our right to live makes the case that this wealth – a consequence of the work of thousands of generations throughout history plus the contribution of the entire current world population – should be distributed through a Universal Basic Income (for the entire population), unconditional, individual (for every person by the fact of having been born) and sufficient (to allow a person to have assured subsistence).

How to finance a UBI – something which could be paid for by the state – is a topic of debate, although many proposals suggest raising taxes on the wealthiest, something which would act as a tool of social justice by redistributing the profits that a handful of people receive from the work of everyone else.

Promoted by Pressenza and Humanists for Basic Income, the film was premiered at the May 2018 European Humanist Forum in Madrid and has been translated into seven languages (Spanish, English, French, German, Italian, Greek and Portuguese).

Today we invite you to enjoy it and to find out what Universal Basic Income and understand the differences with concepts such as minimum wage and social security.

Here’s the link to the documentary. Please watch it and share it! 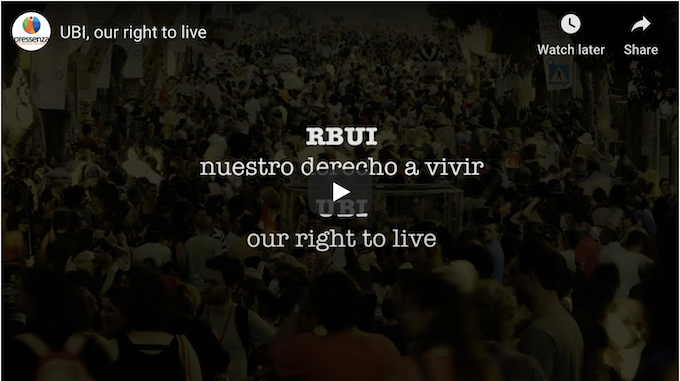 The UBI Maze | Reflections on ‘The Future of Work, Technology and Basic Income

Stay-at-Home Parents Work Hard. Should They Be Paid?

The crazy, true story of Nixon and basic income

UBI is Social Security for the 21st Century