Instead of personal tax credits, everyone in Ireland could start each week with €75 ($84)

Give everyone €75 a week. All adults regardless of whether they are in employment or not, regardless of their income, irrespective of their household circumstances.

This is the pathway to a more rational and efficient social protection and income tax system, to reducing in-work poverty and precariousness, to boosting living standards and to a more efficient productive economy.

In one respect, there is nothing new in this proposal. We already spend a lot on cash transfers to households: billions through the social protection system, tax expenditures (i.e. tax reliefs, allowances and exemptions) and targeted supports such as education maintenance grants.

The €75-per-week proposal is not in addition to these payments. Rather, it is a reform intended to create a more progressive and efficient transfer system – especially for those in low-paid work.

This is not a Basic Income proposal but it does borrow certain principles; namely, the unconditionallity (everyone gets the €75). However, unlike Basic Income, it does not cover all the basics needed for an adequate income.

For instance, the Vincentians estimate the minimum essential living standard for a single person in urban areas to be €245 per week (higher in rural areas due to the need for a car). €75 is a long way from that.

Most of the benefit of this proposal would go to the low-paid or those below the income tax threshold. For those fully in the income tax net, the state pays a single PAYE employee €3,300 a year in tax credits (€1,650 personal credit, €1,650 PAYE credit). This is a flat-rate payment, regardless of earnings. In that sense it is progressive.

However, there is a flaw in the system.

Below the income tax threshold, the lower your income, the less subsidy you get. 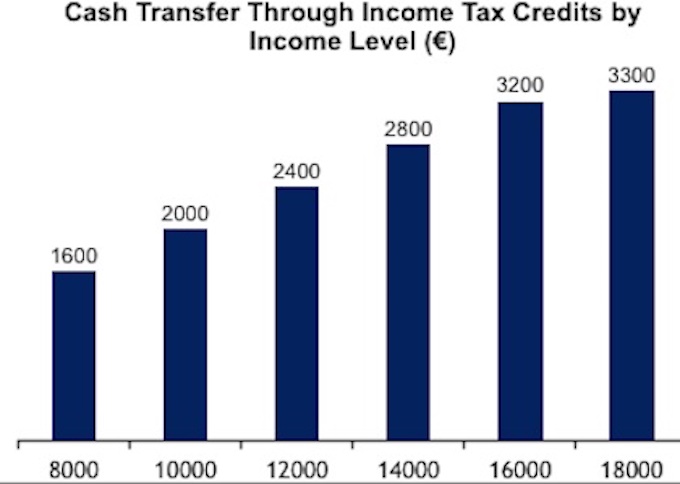 By making the payment directly, all income groups at work would receive the same payment. In that sense, the €75 per week (or €3,900 per year) is merely an extension of the personal tax credits to everyone in the workforce.

The €75 a week would also be paid to those reliant on social protection payments. However, it would be a matter of policy whether this would increase a recipient’s income.

However, this provide an opportunity to increase social protection payments towards the Minimum Essential Standard of Living which the Minister for Social Protection recently discussed.

Estimating the cost is difficult as we don’t have an accessible database of earnings for those at work. Revenue Commissioners data includes those on occupational pensions.

Further, there would be complex cost estimates for couples with both earning, couples with one earner, and the interaction between social protection and tax for temporary, casual or part-time workers.

Given that, let’s see if we can come up with a (big) ballpark figure for 2016, the last year we have full data for.

There were about 450,000 adult dependents (married persons’ or civil partners’ tax credit). Extending the €75 per week to this group would cost €1.8 billion.

The total cost would be €9.9 billion. This would be recouped through the abolition of personal tax credits.

Total savings would be €8 billion. Therefore, the net cost would be €1.9 billion. The Government has already set aside €3 billion over the next five years for tax cuts.

This would be a far more progressive approach – and less expensive.

The abolition of the tax credits would mean that workers would receive €75 per week, but after that all income from work would be taxed. For example, someone earning €10,000 a year pays no tax.

The above does not take into account any net gains for those on social protection payments. However, moving towards the Minimum Essential Standard of Living would still not exceed the costs of the Government’s proposed tax cuts.

What are the advantages to this system?

First, most of the benefits would go to the low-paid, or those below the income tax threshold. Not only would this boost living standards and reduce inequality, it would also help in our Brexit-fevered times. These income groups would be likely to spend almost all the additional income they receive, helping to maintain consumer demand.

Second, it could help reduce some of the complexities that occur when social protection payments meet working income (impacting on the low-paid).

For instance, means-tested unemployment payments can vary depending on how many days work you might get; some of this complexity (and reliance) could be reduced if you receive a weekly guaranteed income.

Third, depending on the impact of such a guaranteed income, it could be expanded into a more full-blown Basic Income. The point is that we would have some evidence on which to base any decision to increase the guaranteed income.

This would not revolutionise the tax/welfare system – but it could make it better. It is only one brick. We need several more. But it’s something we can start in the upcoming budget.

Michael Taft is a researcher for SIPTU and author of the political economy blog, Notes on the Front. His column appears here every Tuesday.