Amazon Go Grocery opens today on Capitol Hill, with a produce section, booze, and a bakery, but no checkout

Is this the future grocery shoppers want? Jeff Bezos sure hopes so. The first ever Amazon Go Grocery — which opens today at 610 E Pike Street on Capitol Hill — is bringing the cashierless technology of smaller Amazon Go convenience stores to a fully-loaded neighborhood market. After scanning the Amazon Go app near the entrance, shoppers just pull items off the shelves — whether loose avocados, a six-pack of beer, or some skirt steak for dinner — and then walk out when they’re done without having to interact with another soul (or even a self-checkout screen).

It may be a more seamless experience for those already familiar with Amazon Go convenience stores (there are five here in Seattle, and 25 total around the country). The most obvious difference is Amazon Go Grocery has a larger scale and inventory, with around 5,000 items and 10,000 square feet of space, more than five times the size of the average Amazon Go. While the convenience stores mostly specialize in grab-and-go offerings and light snacks, the new Capitol Hill market features a produce section (which will be stocked daily), a bakery (with doughnuts from popular local shop Donut Factory), and a section with wine, beer, and hard liquor.

In terms of the food lining the shelves, Amazon Go Grocery has a mix of Seattle-based purveyors, such as Ellenos Greek Yogurt, Uli’s Famous Sausage, and Beecher’s Handmade Cheese, as well as Amazon house brands (like Happy Belly), and the 365 offerings from Amazon-owned Whole Foods. Shoppers can also find an array of pre-packaged dinner options from the likes of Carso’s Pasta Company and Sri Bella. Nearby Red Hook Brewery and Oola Distillery are among the local options in the boozy part of the store. And there’s a robust selection of home items, pet food, and medicine. 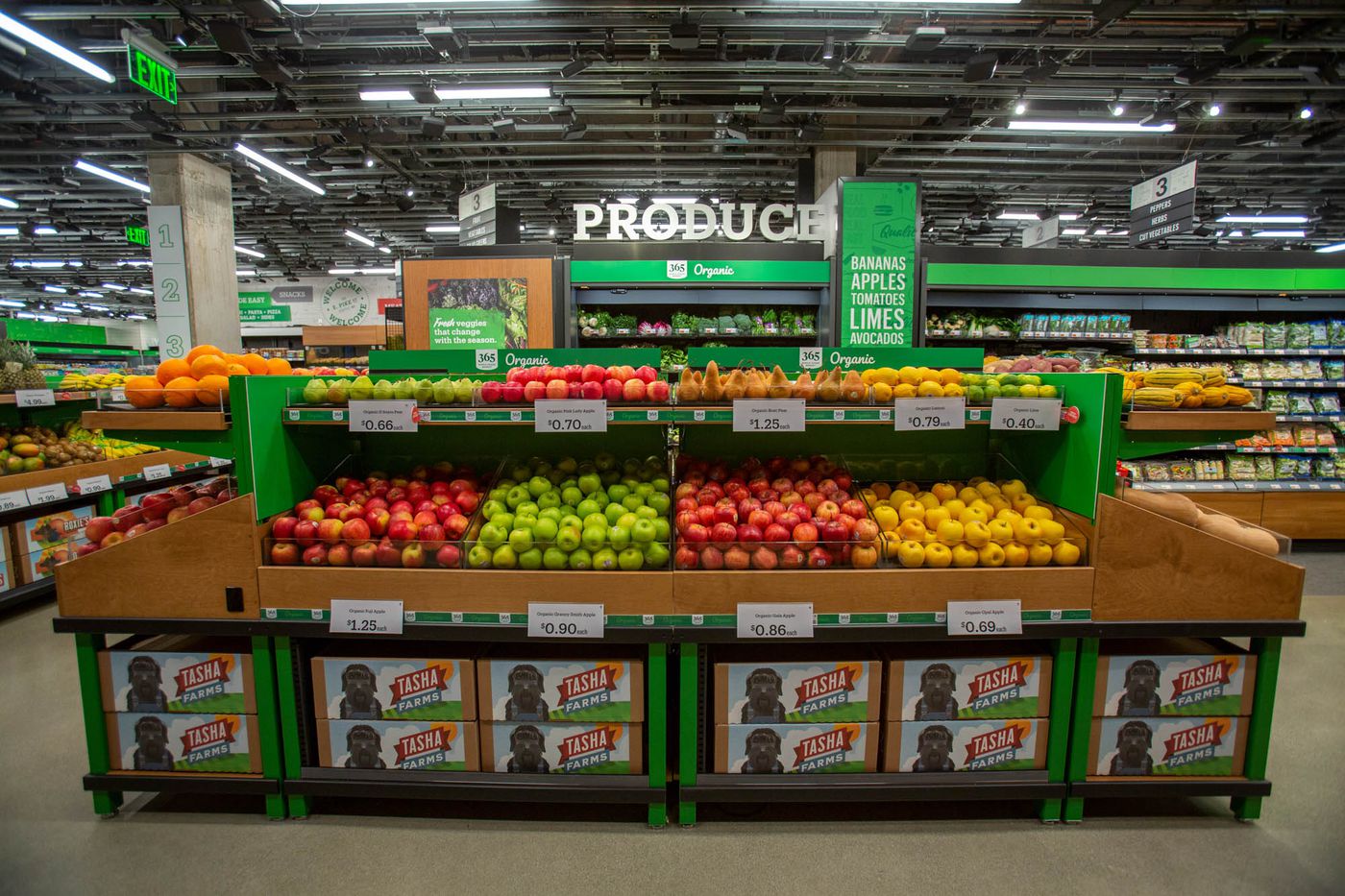 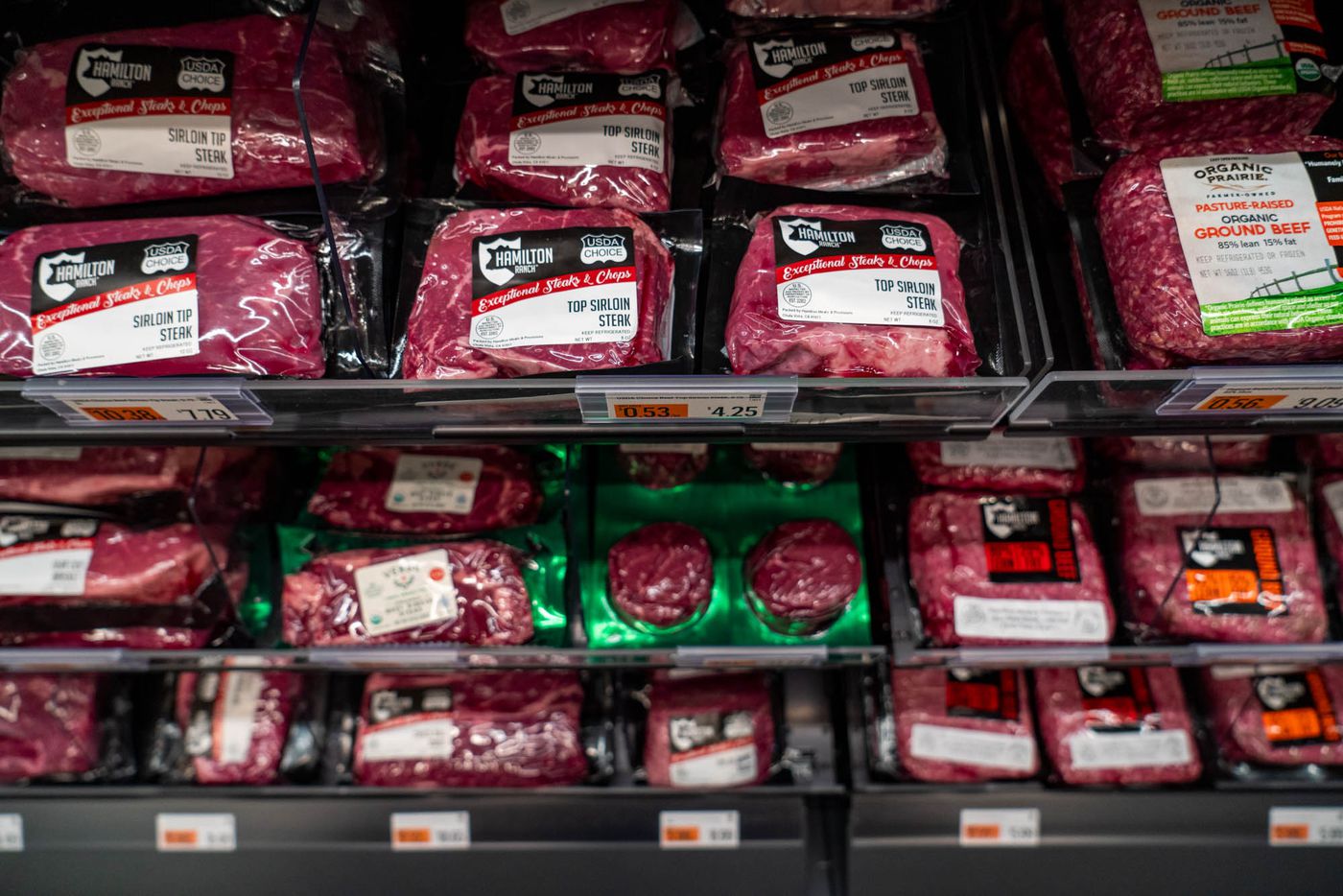 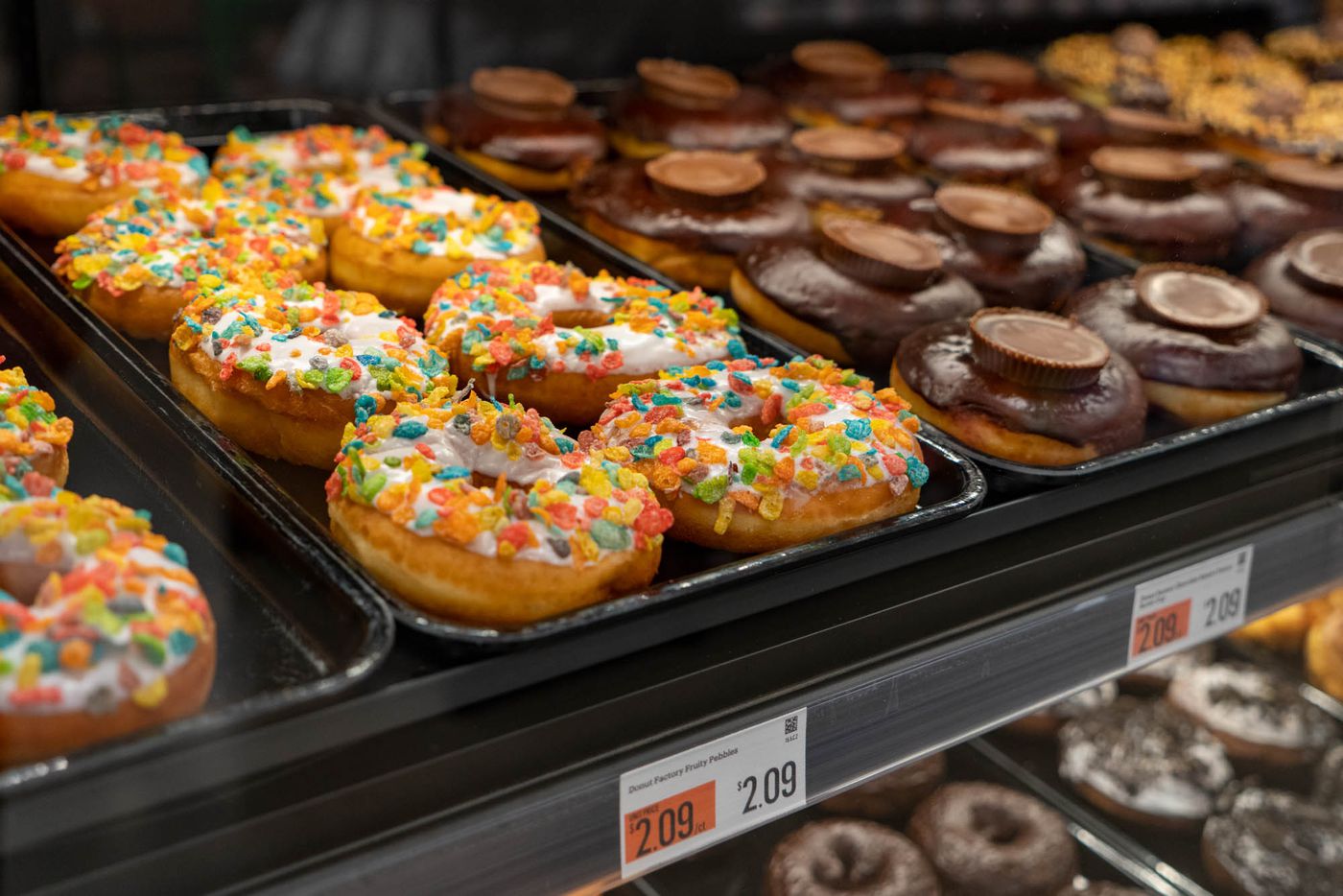 The prices are in line with most area grocery chains, and even cheaper, in some cases. For an apples to apples comparison, each organic Fuji is listed at $1.25 each and a regular Fuji is listed at $0.80 each, while QFC right down the road on Broadway lists organic Fujis apples for $2.79 per pound (organic) and $2.49 per pound (regular ones), with 2-3 apples in each pound, depending on size. There are also a few discounted items in the store, including pints of Talenti gelato for $1.99 (it usually goes for $4-5). The specials are labeled with different tags, and many of the sections have written guides with illustrations, in case shoppers are stumped about, say, what cheese to buy.

In general, after going through the scanners by the entrance, Amazon Go Grocery seems just like any other mid-sized grocer around town — until shoppers look up. That’s where one will see a maze of cameras and sensors near the ceiling tracking what each individual takes off the shelves, in order to tally it up on the corresponding Amazon account. This is similar to Amazon Go, but the tech here must adjust for someone sifting through a pile of tomatoes and putting some back in the bin, or someone reaching into the wet rack for vegetables while the sprinklers are going off, or any number of complications that are more specific to the crowds at markets than small corner stores.

Though there are no cashiers, the place isn’t totally devoid of human employees. There are people around to stock the produce section (with fresh deliveries daily), as well as those who need to check ID for the alcohol. Cameron Janes, Vice President of Physical Stores for Amazon, tells Eater Seattle “several dozens” of employees were hired to mind the store.

Flashy tech aside, it’s fair to wonder how exactly Amazon Go Grocery fits into the company’s ever-expanding grocery empire. After all, there’s the aforementioned Whole Foods, the high-end brand that Amazon purchased three years ago, and Amazon Fresh Pickup, which allows online shoppers to place grocery orders via Amazon Fresh and pick them up at a physical spot. Not only that, but Amazon also recently confirmed that it is planning to launch a line of yet more grocery stores this year, completely separate from Whole Foods and Amazon Go, featuring checkouts manned by real-live people.

Janes claims Amazon Go Grocery won’t have too much overlap with some of the other chains. While there will be a few products at Amazon Go that are also sold at Whole Foods and Amazon Fresh (many of the suppliers are the same), there are significant distinctions. Whole Foods in particular is known for offering more organic, higher-end products. Meanwhile, Amazon Fresh is a much different experience, pretty much all online, and it’s linked to an Amazon Prime membership, unlike Amazon Go Grocery.

But will this new market be a game-changer? It depends on how the Capitol Hill crowds warm up to the still relatively new experience of just sauntering out of a store with groceries like a shoplifter, how squeamish they are about having cameras watching their every move, and whether the selection holds up to the many other grocers in the neighborhood. Trader Joe’s loyalists may be tough converts, since prices there are usually competitive, and larger, higher-end stores, like PCC Community Markets, seem to be operating more like food halls these days, with dine-in options expanding.

Regardless, Janes says a lot of the thinking for Amazon Go Grocery centered around location, location, location. The smaller Amazon Go stores have been opened mostly Downtown, catering to the lunchtime work crowd. But those shoppers may be more apt to do their heavier grocery shopping closer to where they live. Amazon Go Grocery is, indeed, camped in a prime spot on E Pike, a heavily trafficked area within a short distance from many Capitol Hill hubs. In that vein, maybe the most shopper-friendly amenity is a tried and true innovation in Seattle: one-hour free validated parking in the building’s garage.

UPDATED, February 26, 2020, 2:29 p.m.: This piece was updated to clarify and correct the price of an organic versus a regular Fuji apple at Amazon Go Grocery compared to QFC. 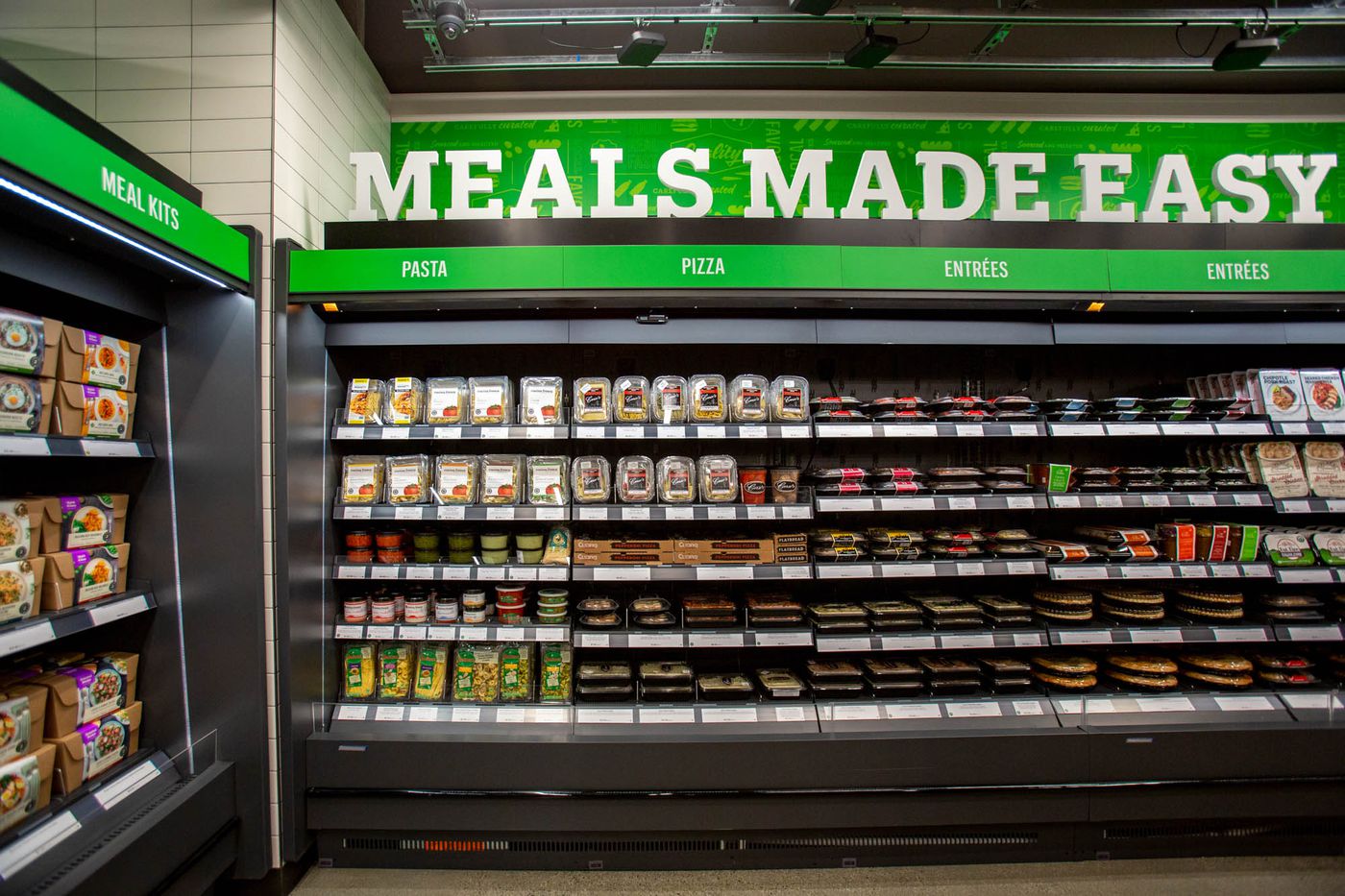 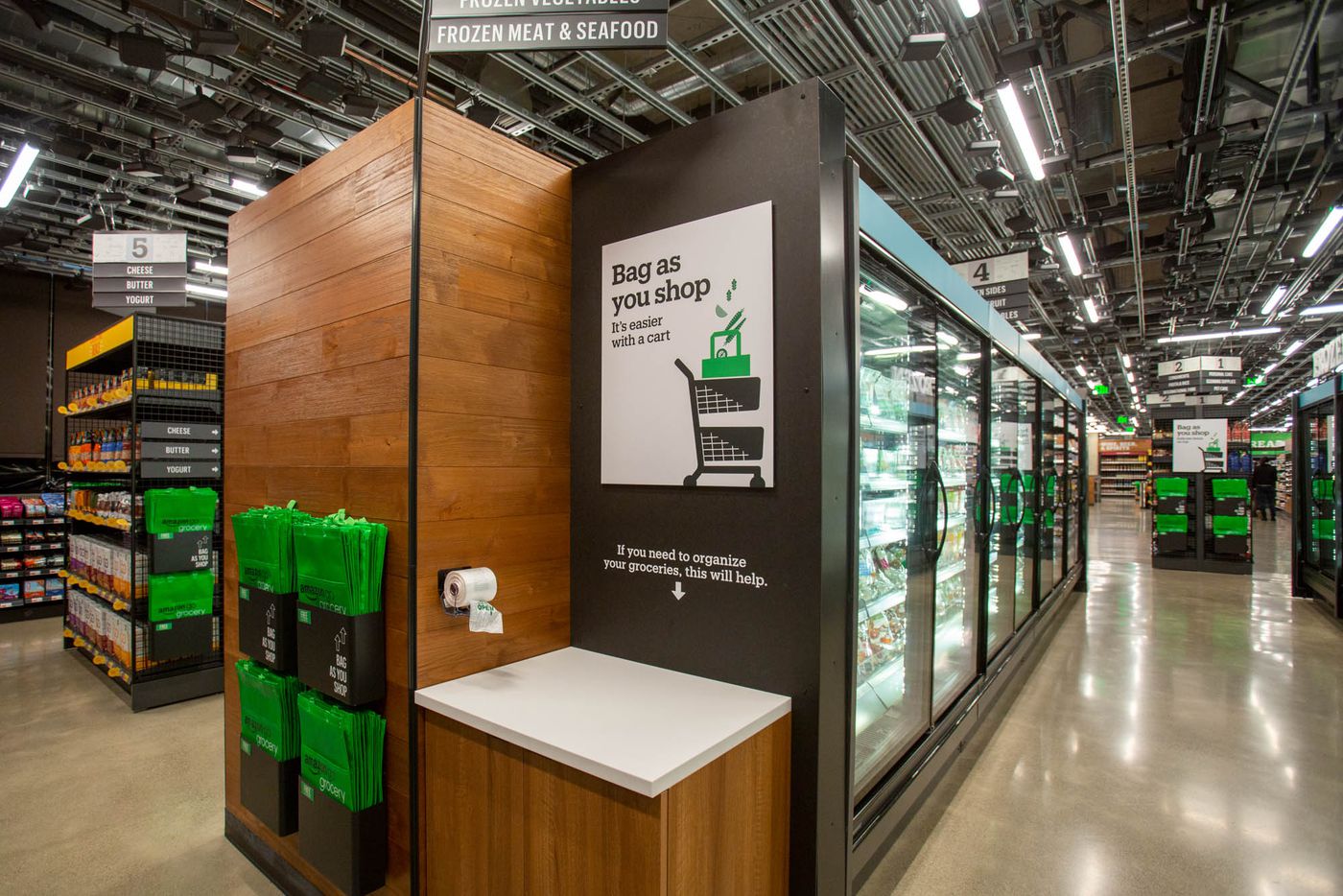 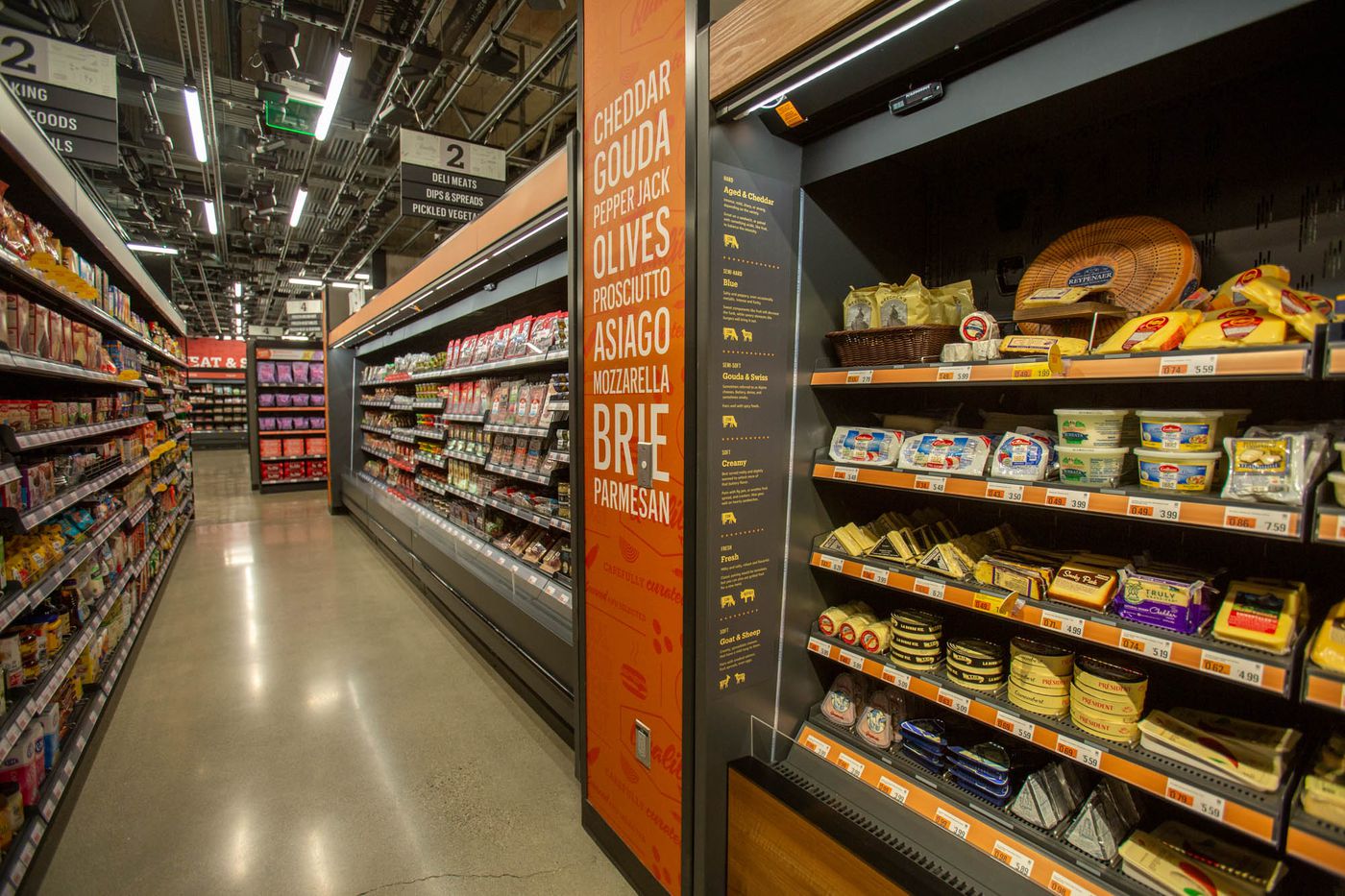 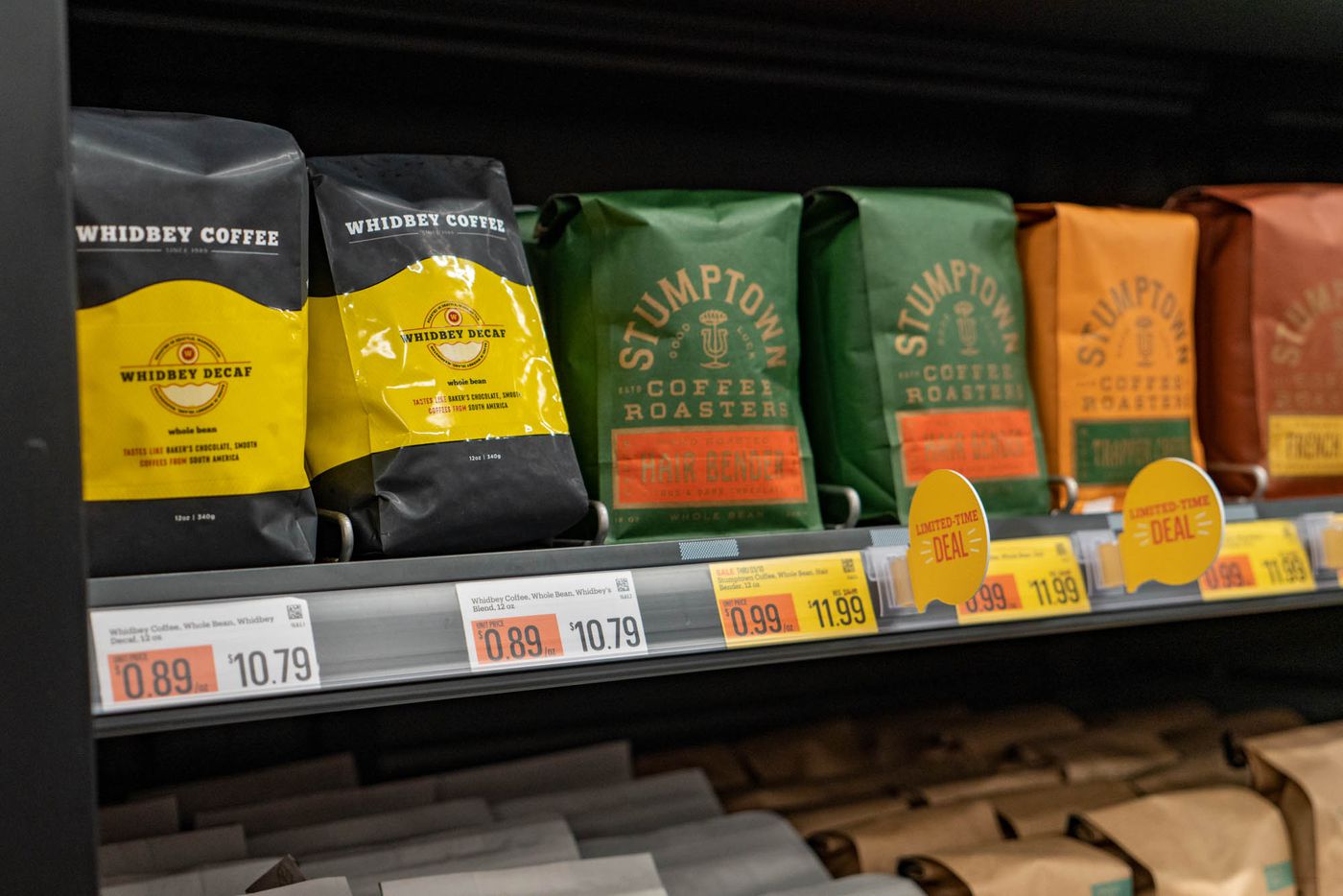 The Future of Retail: More Self-Service