Middle-class families are seeing their incomes stagnating as they are squeezed by the ultra-rich taking a bigger slice, says an international report from the OECD economics think tank.

The report says the middle classes are being “hollowed out”, with declining chances of rising prosperity and growing fears of job insecurity.

The OECD says there will be political consequences for Western countries.

It says middle classes have often been the “bedrock of democracy”.

Against a background of political populism and concerns about rising extremism, the report says that traditionally moderate middle-class families are feeling “left behind” and are increasingly likely to support “anti-establishment” movements.

It warns of a destabilising impact if this section of society – defined as earning between 75% and 200% of the average income – continues to feel that prosperity is slipping away.

In the UK, almost 60% of people live in households classified as being in this middle-income group.

From an international perspective, the OECD shows a changing economic model, in which high earners have accelerated upwards, while those in the middle have seen “dismal income growth” or a falling back.

• Across OECD countries, which include most of the big economies in Western Europe and North America, the 10% of highest earners have increased their income by a third more than middle earners

• In the UK, more than a third of middle-income households “report having difficulty making ends meet”, says the OECD

• In the United States over the past three decades, the top 1% of earners have increased their slice of total annual income from 11% to 20%

“Middle incomes are barely higher today than they were 10 years ago,” says the analysis.

The report warns of social consequences if the middle classes lose trust in the system, beyond their own economic self-interest.

It says the middle classes have been important supporters of sectors such as education, health and housing and “good quality public services”.

But worsening income inequality could threaten “their trust in others and in democratic institutions”.

The study says that this perception of declining opportunities is causing “growing discontent”.

The “stagnation of middle-class living standards” has been accompanied by the emergence of “new forms of nationalism, isolationism, populism and protectionism”.

Instead of upwards social mobility and growing prosperity, the report says the middle classes are more worried about slipping downwards.

The report, Under Pressure: The Squeezed Middle Class, says that totems of middle class family life, such as access to housing and higher education, have become increasingly expensive. 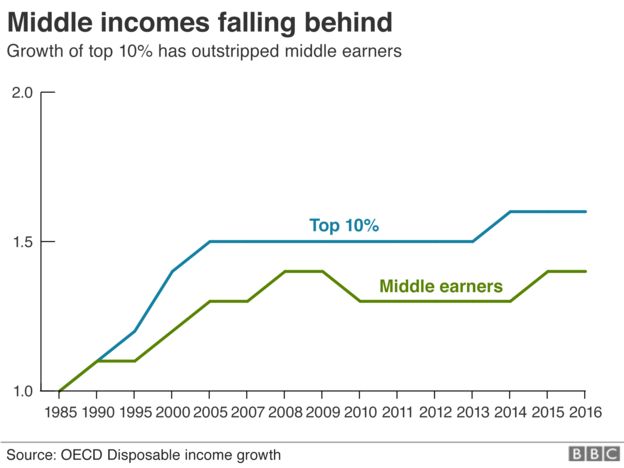 The rising cost of property, in particular, has outstripped the growth in income, with parents worrying about the housing prospects for their children.

Another traditional middle-class advantage has been job security, but this has also been eroded.

The OECD highlights a generational divide – with a shrinking number of younger people in this middle-class group. 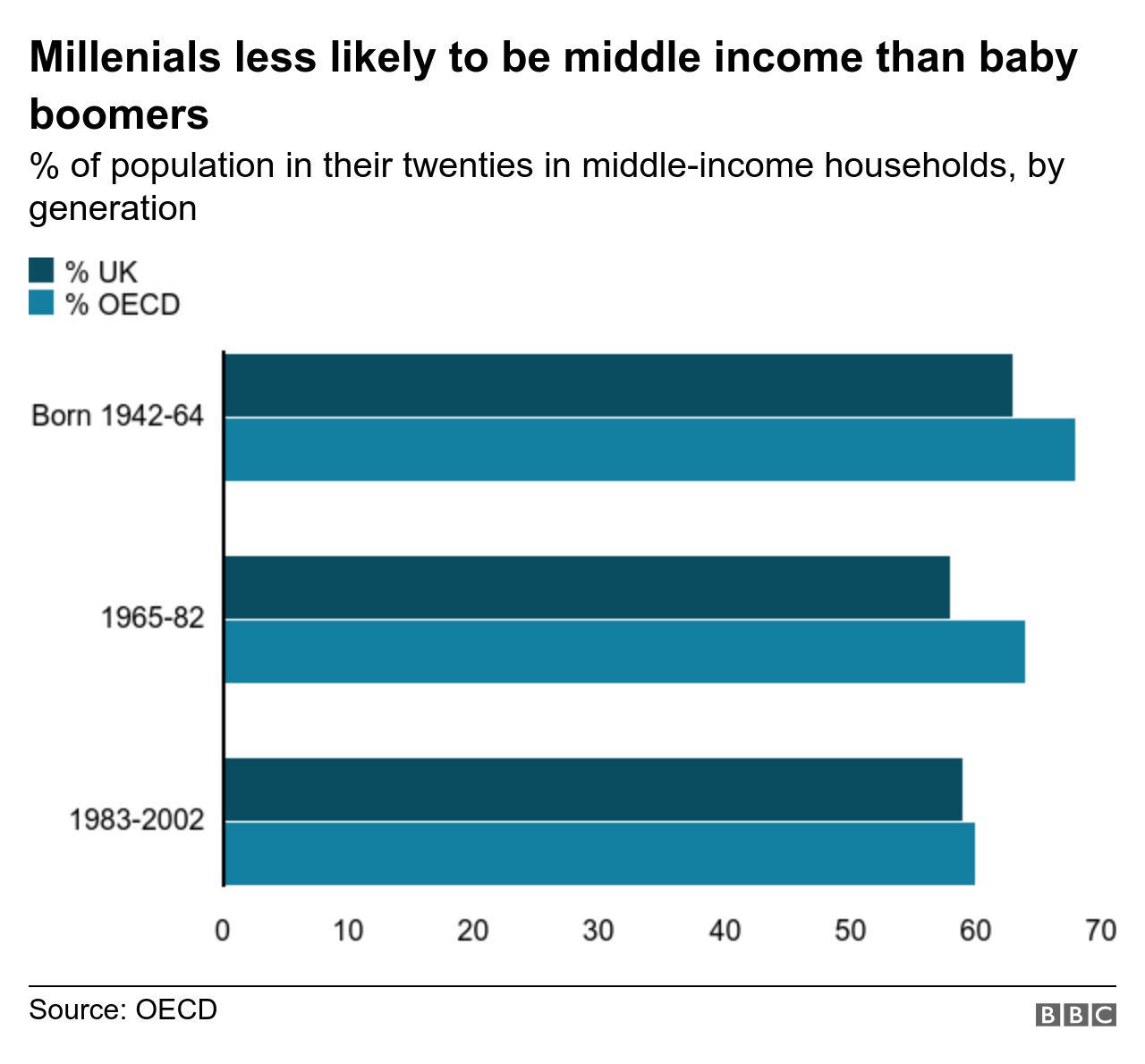 The widening gap of incomes has pushed more people to the extremes of rich and poor, so that millennials in their 20s are less likely to be in middle-income households than baby boomers in their 50s and 60s.

“A strong and prosperous middle class is important for the economy and society as a whole,” says the study.

But it says middle-class households feel a sense of “unfairness” and are “increasingly anxious about their economic situation”.