Automation Could Force Millions of Women to Find New Jobs

And that technology could change the jobs done by women in the way robotic arms in factories put downward pressure on mostly male manufacturing jobs in the U.S. in recent decades. 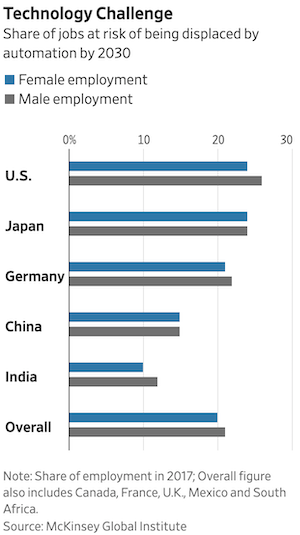 “The new wave of automation is much more than manufacturing and robots,” she said in an interview. “The sectors and occupations for which automation will play a role will vary widely and women could be equally impacted as men.”

The McKinsey study isn’t projecting mass job loss due to automation. It forecasts that 171 million new jobs held by women will be created by 2030—and the rate of job growth could be slightly larger for women than for men over that time period. That is largely because women hold the majority of jobs in one of the fastest-growing fields: health care.

The study considers the number of full-time equivalent jobs at risk, allowing that many jobs will be partially automated. For example, a nurse may spend less time in the future on data entry as smart diagnostic machines and voice-recognition technology improve.

In developed countries, a larger share of jobs are on the line. In the U.S., 24% of female jobs and 26% of male jobs are at risk to automation, McKinsey said.

The elevated automation risk found by McKinsey is consistent with another recent study by the Institute for Women’s Policy Research. That study found that while women make up 47% of the U.S. workforce, they account for 58% of workers employed in fields facing the highest risk for automation.

To land jobs expected to be created in the next decade, many women will need to obtain new skills and move into different occupations. The McKinsey study is cautious about projecting that will happen, noting women face several barriers to gaining the skills they will need to transition to in-demand jobs. Men may have an easier time transitioning to new occupations or adapting to technological change, according to the study’s authors.

Among the barriers faced by women is that they take on a higher share of unpaid care work, including child care, leaving them with less time to seek the education needed to make job transitions. Other challenges include more difficulty moving for jobs, smaller representation among students of science, math and engineering and reduced access to technology, especially in emerging economies.